They are an iconic symbol of all that is good, just and fair within Canada and the Canadian Culture: The Royal Canadian Mounted Police, or RCMP. With their distinctive crisp red uniforms and wide-brim hats, the RCMP has stood proudly for generations as a backdrop for hallowed halls of government, pomp and circumstance. Not to mention crime prevention and the maintaining of law and order. For years, the RCMP Musical Ride thrilled audiences with their precision on horseback. But now, the RCMP is accused by female officers of having been taken on a very different ride: gender discrimination and harassment. 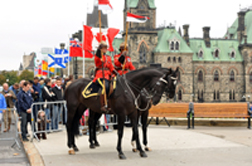 This week, a courtroom in British Columbia is the scene for a five-day hearing to determine the merit of a proposed class-action discrimination lawsuit brought against the revered force. The allegations include an alleged culture of workplace gender discrimination going back years that the lead plaintiff claims is systemic.

According to a report by the Canadian Broadcasting Corporation (CBC 5/31/15), the lawsuit was brought by RCMP Constable Janet Merlo. “My name is on there, but there’s 400 ladies standing behind…from nine provinces and all the territories,” Merlo told the CBC.
“It speaks to a problem that’s systemic and that’s nationwide.”

The allegations are stunning. They include rape, unwanted sexual touching, physical assault, threats, various comments taken as sexist, gender discrimination, and harassment and bullying. According to the CBC, Merlo - who is the only named plaintiff in the employee discrimination case - alleges in an affidavit that a supervisor made “overtly sexual comments to me, offering to rub my breast…offering to give me his ‘big Italian salami’ and asking if ‘I liked it on top?’”

Merlo also alleged another supervisor gave her a hard time when she wanted to take maternity leave with her first child. “He just started yelling and screaming at me,” she recalled, in allegations published by the CBC. “If I wanted a career in the RCMP, I’d have to decide on that or I could pop out kids my whole life…he told me that next time I should keep my f---ing legs closed.”

Another female Mountie, Joanne Mayer and a potential plaintiff in the proposed class action, told Canadian Press (CP 6/1/15) that the greeting she received as a new recruit of 22 for her first posting in Gibsons, BC, was blunt and to the point: “We don’t think women should be in the force, and especially not French-speaking ones.’” Mayer is a native of Quebec.

There are rules governing discrimination in the workplace. Employees are protected from racial discrimination, religious discrimination or gender discrimination. Mayer claims she was stuck for two years performing “sexist” chores such as making coffee, maintaining an ample supply of cream and sugar in the canteen and cleaning police cruisers.

More DISCRIMINATION News
Other allegations are far more egregious. Merlo - who initiated the lawsuit in March 2012 - says that one sergeant kept a naked blow-up doll in his office, and on at least one occasion, left sex toys on Merlo’s files. “My boss told me he’d left me a present that was long and black and thick and I could take it home on days off and have fun with it,” Merlo said, in allegations published by the CBC.

No fewer than 363 women have joined the gender discrimination lawsuit since Merlo launched the litigation three years ago. More are waiting to join, depending upon the outcome of the hearing. That process is scheduled to continue this week and wrap up Friday, June 5.

Plaintiffs maintain that while the RCMP is in the throes of making changes to its culture, it remains “a misogynistic organization,” Merlo says.

It should be noted that none of the allegations have been proven in court. Were they to be, Dudley Do-Right would be aghast.

If you or a loved one have suffered losses in this case, please click the link below and your complaint will be sent to a discrimination lawyer who may evaluate your Discrimination claim at no cost or obligation.
Request Legal Help Now

Posted by
Captain Ahab
on June 5, 2015
A far more serious matter is the RCMP giving in to and sucking up to bullies from the Sikh members of the RCMP. It is ridiculous and unjustified by law or logic to let the Sikhs thumb their noses at tradition and uniform regulations by wearing turbans instead of the traditional and much-admired black hat. This is insulting to the rest of the RCMP as well as its admirers.

It also opens the doors to further idiocies. What is next? Will Muslims be allowed to wear their own varieties of rag or cloth? Will Jews wear yamulkas instead of hats? Will throwing standards out the window lead to Mounties being called "ragheads?"