"I Gave My Right Arm to Shoulder Pain Pump Makers"

In the past three years, Valerie has undergone three surgeries for a torn rotator cuff on the same shoulder. The first two times she was given a shoulder pain pump that resulted in even more pain and no range of motion. "Now my right arm is practically useless and I am right-handed," says Valerie. 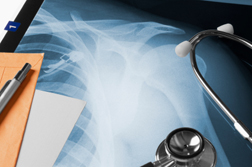 Valerie was injured in December 2007, and it was a Workers' Compensation case, which meant that her three surgeries were court-appointed. The third surgery, without the pain pump, wasn't much better: By that time she barely had any cartilage left.

"Pulling those tubes out was a really weird thing to do, it made me almost pass out. I can't explain the feeling—it wasn't pain but something moving around in your joint was sickening. It was down in my shoulder at least 12 inches. I had my husband pull it out the second time because I couldn't go through with it. The pain continued after the second surgery, and again, I had no range of motion.

"When I was told that I needed a third surgery, I asked my workers comp attorney if I had a choice. I told him that my shoulder was getting worse and I didn't want it done. But because it was a workers comp case, I had to get it done. My attorney said that I had to give them every opportunity to fix my shoulder—I didn't have a choice over my own body.

"The third surgery was supposed to be different. The surgeon was supposed to use bovine tissue to create a new rotator cuff so it would stretch and cover the area. But when I woke up from the anesthetic, I found out that he had done the same surgery over again, but no pump this time. He said I didn't need the bovine but it still hasn't healed and I still have a tear. According to the surgeon, the tissue was healthy and looked like it would heal but that clearly was not the case.

"My surgeon sent me for testing at a physical therapy rehab clinic, which took about three hours and they concurred with these restrictions: I can only lift up to 5 pounds occasionally, never repetitive or constant lifting and never above my chest.

"My surgeon said he didn't know why it isn't healing, and that I am the exception to the rule. The shoulder pain pump was never mentioned but he didn't use it for the third surgery. And my shoulder did get a bit better. However, he didn't give me a reason why the pain pump wasn't used and that is really odd. And that is when I connected the dots…

"The clincher was when my dad saw an ad on TV about shoulder pain pumps linked to chondrolysis or PAGCL, and I started doing research on the Internet. I was shocked and so frustrated to discover it was used for something not FDA-approved.

"The insurance company that I sued for my workers comp case sent me to their doctors and my attorney sent me to the law firm's staff doctor. Both of those doctors said that, after looking at my MRI, there is not enough cartilage left to go in and fix anything further.

"Adding to my frustration, workers comp will not cover testing for PAGCL. Furthermore, my workers comp attorney said I couldn't get a pain pump attorney until he closed the case. Now I am beginning to think that is not right.

"They closed my case and I contacted lawyersandsettlements.

"None of their reports mentioned the shoulder pain pump. I am 36 years old and they took my right arm away. And after researching the shoulder pain pump, I discovered that I was not the exception to the rule, as my surgeon said. In fact, I was one of many who likely have PAGCL. I am suffering from every PAGCL symptom you have listed on your website.

"As for work, I have applied for social security disability. I also just started a vocational rehab program, which the judge ordered. At this point I cannot even sit at a desk for eight hours. Sitting at my dining room table, playing cards with my kids, hurts so much after 30 minutes that I have to move.

More PAIN PUMP News
"Since the first rotator cuff surgery and the first pain pump, I have been taking pain meds and muscle relaxants, and now I have arthritis as a direct result of this—my surgeon said as much. And the court also ordered a pain management doctor.

"If not for my husband, I don't know what I would have done. My kids are 16 and 11 so I didn't miss holding them, but it causes so much grief—I can't even play ball with them. Because the shoulder pain pump took away my productivity, I suffered from major depression and was in counseling for almost a year.

"These days I am much better, and after this vocational rehab, I hope to work part-time as a counselor—staying at home 24/7 is driving me crazy. And I want to sue the makers of this shoulder pain pump. It is their fault and I want the world to know, I want to tell everyone who is going to have surgery that they should tell their doctor—NO pain pump."

If you or a loved one have suffered losses in this case, please click the link below and your complaint will be sent to a defective products lawyer who may evaluate your Pain Pump claim at no cost or obligation.
Request Legal Help Now

Posted by
cindy
on March 27, 2015
I too had shoulder surgery,that ridiculous pain pump is nothing but a profitable procedure to soup up your surgery bill.

I took mine out once I got home, so glad I didn't use a drop of the medicine. After I read side effects,heart damage etc plus it doesn't even control pain from what I know.
it did leave me with a nasty infection,took antibiotics.
my shoulder is practically normal after only 10 days

Posted by
Jeanie
on December 6, 2013
I don't believe you were misdiagnosed as the person above suggests… I myself have had VERY similar outcomes from 3 prior surgeries on my shoulder. As well as the cervical issues, that resulted in a c5-c6 fusion. Your WC attorney misinformed you about starting a pain pump law suit. I started mine during my WC claim. I also applied for social security 15 months after my WC claim began. I'm sorry for all that you've been through, I completely understand. The state I live in doesn't allow class action law suits, so I needed to seek an attorney outside of my home state. Don't give up, keep fighting for your rights to be protected. The pain pump providers knew they were wrong. For me, this horror story began when I was 36. Now I'm 41, on SS, had 3 surgeries which included a partial shoulder replacement at 38 years old & still in pain. I received a settlement from WC & now I'm close to the end of the pain pump settlement. I went back to college, aced my courses, only to figure out that the long days that are required are too much for me to handle. It's sad, but I can't give up and neither can you. Good luck with everything. I hope things are getting better for you.
Posted by
Linda Ballard
on March 4, 2012
Valarie, Ponca City, OK ~ FYI ~ It sounds like your condition has been misdiagnosed. I has cervical disc surgery many yearsw ago and bilateral shoulders, arms, and hands were affected. I had a tremendous trouble getting workman's comp insurance carrier to treat carpal tunnel in the beginning (My case was Oklahoma WC also) and due to delay suffered permanent damage. I REFUSED to release the insurance and insisted my medical be left open, which should be something for you to consider in your early treatment and lack of acceptble relief. To address only your current problems, I suggest you have a "Standing MRI" done now. It will most likely not be something Medicare will cover once you let the WC carrier off the "hook". A regular MRI is done with the patient lying down and as a result does not give a clear picture of what is going on in the spine while sitting, standing, or attempting any other quality of life issues, not to mention the PAIN!

My case has been misdiagnosed for many years and recently have discovered very exciting new procedure very less invasive than main stream surgery. The problems which have plagued me the most and caused most of my pain were related to radicular problems with shoulders and wrists and mostly right side and I too am right handed. My WC case was tainted by lawyers who has their own financial interest and not my own.

I underwent 8 surgeries, 3 each wrist and 2 on both ulner bones, and all were unnecessary. Only time will tell the true extent of such an injury and no one follows up on the rest of the story.

The "pump" was reccomended along with "stimulators" , epidural injections, and RF abatements (rhyzotomy) and I did not agree to the "pump" or the "stimulator" due to the invasiveness. I got no relief with epidural injsetions and had major problems with rf abatements (I can elaborate). All of these procedures carry too many risks. Pain Clinics are making too much money doing all of these while there is relief available if you do not have the limitations of Medicare when you become permanently disabled and have to get Social Security Disability Income after you are not able to secure another full time job.

I have been tossed from one pain clinic to the next and abused and exploited by all medical professionals. Even without a "standing" MRI a very inevassive diagnoses and treatement is now available if you care to check into it. Pain doctors very ofter cause permanent damage and invasive surgery carries too many risks. I have been damaged more by pain clinic doctors than any other doctors. Once you get on with one or more of them, they will keep you there treating things that do not exist and mame you for life.

Take control of your own treatment and get some second opinions from neuro and orthopedic doctors and not PAIN clinics or anesthesia professionals. They do have a place but considering the sevierity of your condition and how really fresh it is, there could be help out ther for you if you just look. I would be glad to counsel you and my counsel is FREE!

Lots of luck girl, we are on your side and you could help many others in similar situations past and present by your tenasity. I would be glad to join in some class action but it would have to include other PAIN treatements which are for the most part "Bogus".