A New Mexico judge has ruled that Zimmer must pay $2 million after a bench trial concerning one of its hip implant devices that allegedly injured a patient. 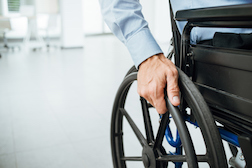 McDonald claimed in his lawsuit that he developed metallosis, a form of metal poisoning caused when metal-on-metal hip implant components rub together and release microscopic metal particles into the bloodstream and tissues.

"Plaintiff’s metallosis was caused by a defective condition of the MLTK implant, which resulted in him having a significant amount of metallic debris at the taper junction," Nash wrote in his bench verdict, noting that Zimmer did not make use of all options available to fully test the product.

"Defendant did not fully or adequately test the configuration of this new, dual-modular design with two metal-to-metal junctions that was implanted into Plaintiff," according to the verdict. While Defendants did not know of the defective condition of the MLTK at the time of Plaintiff’s first surgery, over time it has been shown to be defective."

McDonald isn't the only person to have problems with the MLTK or face revision surgery.

Zimmer's internal report to the Manufacturer and User Facility Device Experience (MAUDE) reflected a total of 47 MLTK devices that were revised due to metallosis between July 9, 2009 and June 20, 2016, according to court documents. However, the judge also noted that not all doctors report problems that appear through revisions to the manufacturer.

More DEFECTIVE HIP IMPLANT News
As a result of the two revision surgeries due to metallosis and the subsequent infection, McDonald can no longer play tennis or golf and fish as he had done in the past, wrote Nash in his verdict. McDonald will also probably need a third, more complicated revision surgery in the future, Nash wrote.

"This surgery will cost approximately $250,000 and will involve removal of all of the implant components for a period of 2-3 months to try and kill the infection, during which Plaintiff will be wheelchair bound," according to the verdict.

If the infection can be successfully eradicated, another hip prosthesis will be implanted, necessitating the same type of physical therapy and recovery period as the first two revision surgeries, according to court documents.