The availability of autodialing technology is not lost on the banking industry, competitive as it is. And while disgruntled plaintiffs line up over Comenity Bank TCPA violations, as an example, Comenity is not the only bank accused of violating the Telephone Consumer Protection Act (TCPA). 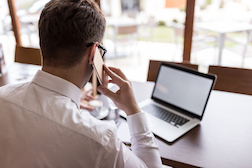 To that end, Capital One NA is facing a proposed class action in the Sunshine state after a Florida man became fed up with auto-dialed calls – often referred to as robocalls – to his cellphone. Plaintiff Darrell Pickett asserts that he’s never been a customer of Capital One, and that the calls appear to be directed to someone other than him. Court records show that Pickett has attempted to explain this fact on numerous occasions to Capital One, but to no avail.

The Capital One robocalls keep coming, chewing up his mobile phone minutes and driving him to distraction.

The proposed class action was filed on February 14 of this year – Valentine’s Day. While Pickett did not reveal his motivation for choosing that particular day to file – if, indeed it was a coincidence – there remains little doubt that the proposed Capital One TCPA violation class action is decidedly not a valentine to Capital One.

According to court documents the Capital One telemarketing violations began after he obtained a new cell phone number. Pickett, who hails from Orlando, alleges that he received “a slew” of calls from a number assigned to Capital One from at least April through July of last year – including at least one voicemail asking for someone who was not the plaintiff, and with whom Pickett was never acquainted.

Pickett asserts he contacted Capital One on at least one occasion, explained the situation with regard to the wrong number and asked for the calls to stop.

Pickett alleges invasion of privacy, intrusion and private nuisance. Not only did the robocalls deplete his cellphone minutes – which represented a cost to the plaintiff out of pocket – but the telemarketing calls also tied up his phone line unnecessarily.

He seeks to represent a class of individuals having been robocalled by Capital One NA without express or prior consent, during the last four years.

The Capital One Telemarketing violation lawsuit is Darrell Pickett v. Capital One NA, Case No. 6:17-cv-00260, in the US District Court for the Middle District of Florida.

If you or a loved one have suffered losses in this case, please click the link below and your complaint will be sent to a consumer banking lawyer who may evaluate your Comenity Bank TCPA Violations claim at no cost or obligation.
Request Legal Help Now