Lawsuits have been filed against Capital One Financial and Capital One Bank, alleging that Capital One violated the Telephone Consumer Protection Act by using an automated telephone dialing system to "robocall" consumers in an attempt to collect on a credit card debt. Robocalls and telemarketing calls are currently the number one source of consumer complaints to the Federal Communications Commission.

Send your Capital One Robocall claim to a lawyer who will review your claim at NO COST or obligation.
GET LEGAL HELP NOW 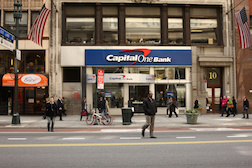 The Telephone Consumer Protection Act (TCPA) became law in 1991 to protect consumers from unsolicited pre-recorded or autodialed telephone calls, text messages or faxes. Originally, the law was aimed mainly at telemarketers. However, the TCPA also now specifically prohibits calls from companies to all wireless devices without the recipient's permission. Additionally, the TCPA prohibits companies from calling customers after the recipient of the call tells the company to stop phoning.

The Federal Communication Commission requires private robocallers to have prior consent to use automated telephone dialing to robocall or text your cell phone. Consumer can also register their numbers with the FTC’s Do Not Call list, which requires legitimate telemarketers to stop calling you.

An Ohio woman in May 2017 filed a lawsuit, Alicia Duris v. Capital One Bank NA, Case No. 1:17-cv-01048, US District Court, Northern District of Ohio, against Capital One, alleging that the bank called her cell phone with an automated telephone dialing system 155 times while attempting to collect a debt. Capital One allegedly never obtained Duris' consent for the automated calls to her cell phone and called her additional times after she asked the bank to stop calling.

A lawsuit was also filed in Los Angeles federal court in Feb. 2017 against Capital One, alleging that the bank called landline numbers of consumers registered on the no-call list and continued calling after those consumers told the bank to stop, according to Reuters.

If you or a loved one has suffered similar damages or injuries, please fill in our form and your complaint will be sent to a media/telecom lawyer who may evaluate your claim at no cost or obligation.
Please click here for a free evaluation of your Capital One Robocall claim
Last updated on Jun-7-17

Posted by
Jerry Mcclain
on September 16, 2018
Have any lawsuits against credit one bank for this as well? Please send me a link if so so i can sign up
Posted by
Lisa Vanhook
on January 29, 2018
we are called from 6-12 times daily.
Posted by
Alexia Thornton
on October 30, 2015
Thanks for your reply.