Chantix and a Loaded Gun: Police Officer Freaks Out

Pete (real name withheld) will most likely lose his job as a police officer because of Chantix. "At one point I put my gun on the kitchen counter and told my wife to shoot me," says Pete. "Thank God nobody got hurt or killed." 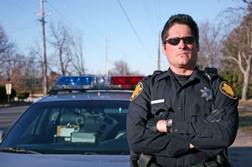 Pete started taking Chantix last May, just before the smoking cessation drug was issued a black box warning. It did help him quit chewing tobacco, but the side effects far outweighed the benefits.


"I don't know how the makers of Chantix sleep at night knowing their product is responsible for ruining hundreds, if not thousands, of lives."
Nobody told Pete about Chantix side effects, and like most people, he didn't read the label. "My doctor said it was a new drug and worked wonders to help people stop their tobacco habit," says Pete, who was given a 10-day supply of sample packs from his doctor. He took 1 mg of Chantix twice a day until August 29, 2009.

"I was at home drinking with my wife and got into a verbal domestic," Pete explains, as though he's writing a police report. "I don't remember most of the incident—my wife told me later it was completely out of character for me. I was very aggressive and at one point (my wife told me later) I pulled my gun out of my gun locker, put it on the kitchen counter and told her to go ahead and shoot me.

"According to my wife, for about the next hour, I was following her around, on my knees, begging her to end my life, to shoot me, I want to commit suicide. I have no history of depression or any kind of mental disorder: this came out of the clear blue. Talk about bizarre. It still seems unbelievable because I can't remember anything, but I know it's true.

"My wife phoned a friend, who then called the police, guys I've known for years, and they came to my house. The next thing I remember is that I woke up in bed—I had fallen asleep-- and the police were outside—my wife told them I had a gun and they were taking every precaution.

"I let them in and they searched my house for guns. I wasn't arrested, no one was injured. They took me to a hotel to separate me and my wife. The next morning I came home and I still couldn't remember anything. I acknowledged that my drinking was getting out of control—I was very hungover—and I checked myself into alcohol rehab. I think this happened due to a combination of drinking and Chantix; I admit that I've sometimes been a heavy drinker but I never acted aggressively or blacked out.

"I was in rehab for 24 days. During that time my wife went online and found out about the Chantix side effects. I was blown away—now I won't even take aspirin.

"As soon as I got out of rehab I saw all the warnings about Chantix and started researching it. I also discovered that I had taken Chantix about a month before it was given the black box warning. The label also said that the prescribing doctor should keep in touch with their patient. I'm a little angry with my doctor. I told him I went to rehab and blamed Chantix, but he just downplayed it, saying it was a rare side effect. Not so, according to the FDA and numerous online sites.

"What's really scary is the research I have done on the Internet. I visit the FDA adverse reporting sight almost daily and see hundreds of adverse reports. The top 10 drugs banned in the US have less side effects than Chantix, yet Chantix has been associated with suicide and violence. Chantix should be included in the top 10. I don't know how the makers of Chantix sleep at night knowing their product is responsible for ruining hundreds, if not thousands, of lives.

More CHANTIX News
"Unfortunately my employer doesn't think so. One month after I got out of rehab I was suspended after an investigation by my chief, who recommended that I be terminated for 'conduct unbecoming of an officer.' (That's a whole other employment issue.) We also have a sergeant in our department who took Chantix before I did and he had to quit taking it because he was flipping out on people, including his subordinates. And these people have been subpoenaed at my employment hearing.

"I am an outstanding officer and have monthly and biannual reviews to back me up. I was climbing the career ladder quickly and was likely the next person to get promoted. I'm a member of our SWAT team and preach firearms safety. I have three kids and for me to do something like this is insane—I love my kids.

"One thing I learned in rehab is that combining a drug such as Chantix with alcohol compounds the effect, but there is nothing on the Chantix black label that mentions alcohol. I feel helpless."

Pete's employment hearing is scheduled for next week—he will keep us posted.

Posted by
John
on July 31, 2013
Wow, I thought I was the only one. Based on what you experienced my uniformed friend, it's like you were reading my mail.

I was a very prosperous professional with two graduate degrees and a loving family until Chantix.

This sh*t is POISON, pure and simple. Many have no ill effects, but for those of us who do, I fear we will be damaged forever! Thanks Pfizer, you dirty pr*cks!

Profits above caring! Knowing that you knew the dangers of this cr*p before releasing it on the general public......well, good luck trying to explain that one to your God.

Posted by
terri
on January 12, 2012
I totally understand where this man was coming from. I took two Chantix scripts back/back in '07. While I knew something was terribly wrong inside my head...I never put Chantix in the equation. I was excited when it first came out and couldn't wait to get started!! It needs to be understood that people don't go to the trouble and expense of getting this script...w/hopes of having horrendous side effects.

Two, long hospital stays which included a psyche unit..in '08...had me thinking I was nuts! Broken! It was a bad, dark, unnerving chapter in my life that I never want to experience again. The hospital stays were (1) taken by ambulance in middle of nite w/horrific chest pains, extreme shortness of breath and stomach spasms as strong as contractions...(2) had a great day at work as usual...love my job of 23 years...daughter called when I got home..said, "mom...what's wrong?...people are worried"...laughed...picked up keys..took long drive to rural area picking up 3 bottles of sleeping pills and razors...singing to oldies...along the way.

Found closed used car parking lot...parked on angle to blend in...downed 240 sleeping pills and cut self w/razor....woke up six days later in ICU when being taken off ventilator...surrounded be devastated family members..what the?...wanting answers. I had none.

This experience forced me to look into big pharma practices...unbelievable. We are guinea pigs. ALL of us. What a rude awakening. I'm embarrased to have trusted so blindly...all those involved in the process of getting a prescription. Learned the hard way...no one has your back. This is a cold, cruel, GREEDY world we live in.