"Chantix Put Me in a Psychiatric Hospital"

"If I wasn't at work that morning, surrounded with good people, I would have committed suicide because of Chantix," says Darlene. Her boss took Darlene to a psychiatric hospital, where she stayed for two weeks.

"In November of 2007 I went to my doctor for a regular checkup," says Darlene. "We talked about how I could quit smoking—I had smoked for 33 years. I had tried to stop on my own—unsuccessfully—so my doctor suggested that I take Chantix; she said that it works really well. 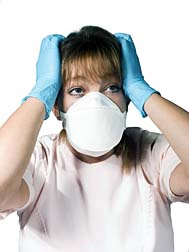 By December I went back to my doctor; I was steadily get more aggravated and couldn't focus on my job. I am the chief technician for a dialysis clinic so it is quite stressful. I was becoming very agitated but my doctor said there was nothing wrong with me except that I was depressed. I asked her if it could be from taking Chantix but she advised me not to stop taking the drug. My mental state was way worse than nicotine withdrawal. I even tried to smoke a cigarette to ease what I was feeling but it just got worse.

I took 1 mg of Chantix for more than 90 days. Honestly, I could have taken more than that but I don't remember; I also had short-term memory loss and I was paranoid about everything. Then a voice in my head told me it was time to check out; that I was worthless. I had spent the weekend with my husband and had my youngest grandson with me. My family told me that I was doing oddball stuff all weekend.

The next day at work, apparently I flipped out. One of my co-workers told me that I threatened to blow my brains out. My boss took me to a psychiatric hospital; I was brought there in a manic state, threatening suicide. That happened about seven days after I stopped taking Chantix. I was diagnosed and treated for bi-polar disorder, type 1, and I was admitted for two weeks. It scared the hell out of me.

All along, I suspected it was Chantix; I even made a call to a lawyer before I went to the hospital. I have never been depressed in my life nor have I ever been treated for any mental disorders. During those two weeks I was drugged on Seroquel. When I was released, I went to counselors, and my family doctor and I have a follow-up appointment with the psychiatrist on June 4th.

More News
I am still taking meds for bi-polar disorder and I wasn't taking anything before Chantix. Not one doctor has admitted that Chantix could be to blame but while I was in the hospital I met several people having the same problems as me and they had taken Chantix. I told my daughter about this and she found people with the same problems on the internet—why can't the doctors understand how dangerous this drug is?

And my medical bills are stacking up—I had a CAT scan, an MRI, and went to a neurologist because of my memory loss. I have medical insurance but I still have to pay; luckily I didn't lose my job and I am back at work; I have a great boss and he told me to take care of myself first.

My doctor told me that stress can cause all these things that happened to me: hearing voices, memory loss, agitation. So can Chantix. My goal is to get this drug off the market. I feel for all those families whose family members committed suicide."

Posted by
Susan Moranie
on April 16, 2011
A few months ago my boyfriend started taking Chantix to quit smoking and after a short time on this medication he turned into a demon. He was a totally different person. I have never a person totally change that quick and turn so mean.
He is no longer taking Chantix. I think he would rather smoke than take that hot mess of a drug.
Posted by
Julie
on November 15, 2010
The same thing happened to me 9 months ago i have no health insurance...I had no mental illness but now still messed up and cant focus on anything... i have a shrink who says i am bi polar but i am not i am j not just super hyper thank god not manic anymore help what can i do i am on paxil and ritalin now...before i had nothing i am 49 and female.

I was on chantix 1 pill a day then 2 pills a day on or about the 5 th day of the second week Chantix told me that if I didn't quit smoking i should kill myself and then I had visions. I went off of it right away then went to a clinic where they tried to give me seroquel and then a mental hospital they sent me home....i still cant function,