Chantix Not for Everyone

Angela was prescribed a six-month supply of Chantix in January of this year. By her second pack, "I would look at a knife and the thought was there—I just wanted to get my life over with," she says.

Angela isn't too impressed with her doctor. Or her therapist or her pharmacist. She was already diagnosed with clinical depression after the birth of her son 18 months ago but none of them were aware of the dangerous—and sometimes deadly—side effects, particularly in someone with depression.

"My doctor was aware that I was clinically depressed but she proceeded to tell me that Chantix was the miracle drug," says Angela. "I smoked a pack to one-and-a-half packs a day. She told me it would take about 6 months to quit—I had a lot of pills. 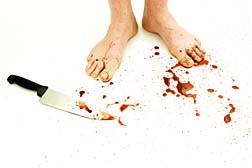 "I took the starter pack in January and started on the second pack the next month. I even asked the pharmacist if there is anything I should be aware of. He said, 'Nope, it's great.' And there were no warnings on the pharmacy label--it just said take a pill with a glass of water.

I went through the second pack and had one pill left when I found out from a friend that her aunt tried to commit suicide while taking Chantix.

I wasn't aware of the changes in myself as I was already depressed and on meds, but when my friends told me about their aunt, they told me about the changes they saw in me in the past two months. I was invited over to their house (next door) and it was almost like an intervention.

They told me that I was mean and very angry and nobody wanted to be around me. I assumed it was part of my depression but I had never acted this way before. My boyfriend thought our relationship was ending because I became angry with him and had violent thoughts—I wanted to hurt him or myself.

My friends also told me that they had researched Chantix online and read some of the side effects to me. I fit the bill. Three weeks prior, I had suicidal thoughts and called a friend who talked me down. I also called my therapist—he knew nothing about the adverse effects of Chantix.

Although I have been diagnosed with clinical depression, I never got that angry or had suicidal thoughts. When I saw that knife in the kitchen, I didn't care for myself; I just didn't give a shit about anyone—I just wanted to get it over with.

I was angry at my doctors for doing this to me. And I was angry at myself for not being more careful, for not researching this drug before I took it. Later, I read the drug maker's box label—that was pretty much too late.

I went online and found out that all these people taking Chantix were complaining about memory loss but I couldn't remember what I had for breakfast, if I had given my son his bottle or not.

I haven't gotten hold of my doctor yet. I quit taking Chantix and just came back from visiting my mother in Arizona—I needed someone around me all the time to get me out of this head space. I told my therapist what happened to me; he was shocked but also told me that others didn't have a problem and he heard that many people quit smoking.

More News
But this drug should have been monitored considering my history of depression. Google Chantix and all this stuff comes up—doctors, pharmacists, therapists could have easily seen the dangers and prevented me from taking it.

As for smoking, after taking Chantix for two weeks, I cut down—they tasted disgusting. On the fourth week, I was done. I haven't started again but I'd rather be smoking than dealing with this mental state. To this day, I still feel strange symptoms. My memory is starting to come back but the anger is a slow process. I am more aware of it but it hasn't left. Now I put my foot in my mouth before I let loose.

I don't recommend Chantix. It definitely should be monitored and cannot be given to everyone. If you do take it, make sure you follow up with regular visits to your care giver. And don't get six months worth of the drug—a lot can happen in that time."