On their doctor's advice, Tara and her husband were both prescribed Chantix to quit their smoking addiction. Although the drug has a high success rate, many users are questioning whether the psychological side effects are worth it. "We were so mean to each other and our kids during and right after taking Chantix, we lashed out at them for no reason," says Tara.

Tara's husband said Chantix was making him crazy and Tara became very depressed, crying all the time. Neither of them have quit smoking. For the first time in her life, she now takes an anti-depressant drug and a sleeping pill at night to relax. 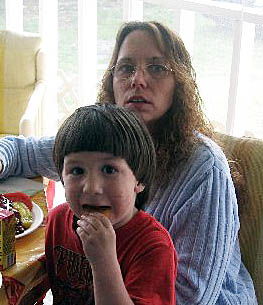 "I was acting so weird that I had to stop taking Chantix after a few months," says Tara. "I was yelling at my kids and didn't even want to get out of bed in the morning. It was like I wasn't really here—it's hard to explain. And I was really nauseous.

At first I thought my thyroid was acting up again so I didn't think anything about Chantix; I just kept taking it. But I sank into this depression, and apparently I was really mean—nobody wanted to be around me.

I mainly feel bad because I lashed out at my kids and constantly screamed at them for no reason. At the time I didn't realize what I was doing; my husband told me after the fact. I went to my local doctor and told him some of my mental problems—I had never been like this before. But he just told me to stay on the Chantix and to give it another try because I really had to quit smoking.

It made me have the worst nightmares, right out of a horror movie. I dreamt of dead people all the time; I would wake up in a sweat and then wouldn't be able to get back to sleep.

But I started to question Chantix. My husband said, 'Ever since you've been taking this drug your personality has changed.' I thought about how I was before, so I told him that I was gonna stop taking it. Sure enough, within a week I was back to my old self. And smoking.

I didn't realize how bad it really was until I saw a warning on TV, saying it was hurting people. The message was: 'If you are taking Chantix, be careful'. I was shocked. This drug is being prescribed to so many people; it's scary. I intend to quit smoking but next time I am going cold turkey.

My husband didn't last as long as me. He quit taking it because it made him nauseous and he was mean too. Poor kids. We've had our share of good times and bad times, divorced and remarried, but this was one of the worst times. It 's a good thing we recognized that Chantix was to blame.

I think it is tragic that the makers of Chantix didn't warn people more about these side effects. God knows what would have happened if we stayed on this stuff any longer."

How many more people will suffer before the FDA recalls Chantix? It doesn't even have a black box warning! In January 2008 Pfizer updated its warnings but not intend to go so far as to issue this strongest type of warning.

The new label includes a warning that patients who are attempting to quit smoking by taking Chantix should be observed by a physician for serious neuropsychiatric symptoms like changes in behavior, agitation, depressed mood, suicidal ideation and suicidal behavior. Pfizer noted that a causal relationship between Chantix and those neuropsychiatric symptoms has not been established.

On May 27, 2008 The Guardian reported that the FDA is "taking a closer look" at Chantix after hundreds of patients reported serious side effects. "We're looking at [the reports], but it takes a while," said Janet Woodcok, director of the FDA's Center for Drug Evaluation and Research.

More News
It is going to take a while, even though, just one week ago, U.S. researchers at the nonprofit Institute for Safe Medication Practices and Wake Forest University found that Chantix was linked to more than 3,000 cases in the US alone of suicide, loss of consciousness and other ailments, including heart problems and loss of vision. The conclusion was based on an analysis of data submitted to the FDA over a course of the past six months.

Meanwhile, Pfizer still defends its product, saying it is in "continuous communication" with the FDA to ensure the drug's label "accurately reflects the product's safety and efficacy profile." Maybe the company also wants to squeeze out more profits while it can: Bloomberg reported a 61 percent drop from its all- time high of $50.04, set by the New York-based company in April 1999, commenting that "Chantix's side effects may include an even lower price."