When John came back from Kuwait a few months ago, his VA doctor said that Chantixwas the 'Number 1' drug to quit smoking. He neglected to tell John of the side effects, such as depression and suicidal thoughts.

"My doctor told me that I could take it for one month at a time, up to three months," says John (not his real name pending a potential lawsuit). "He said Chantix had about an 80 percent success rate, which sounded great to me—I had the patch on and heard lots of negative things about that. My doctor gave me a brief warning when I got my first prescription. She said that there was a possibility of experiencing depression but she encouraged me to take it anyway because of its high success rate." 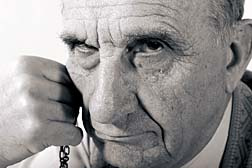 Just a few days after starting Chantix, John started lashing out at his girlfriend and got pretty angry at his friends for no reason at all. "This was totally out of character," he says. "It shortened my temper—I would flare up at anything. And I slept in all day because I just didn't feel that there was anything else to do. When I first got back from Kuwait, I didn't feel this way—not until I took Chantix.

"I took Chantix for about one month and that whole time, I didn't want to be bothered by anyone. Anytime someone wanted to talk to me about important issues, I refused to discuss them. My girlfriend would ask me questions such as how I was doing in class, but I wouldn't answer. I even went a few weeks without talking to my family. They didn't know what was going on but my girlfriend was worried—she knew about the side effects because she came with me to the VA; she was really worried about my depression; she saw what was happening to me but I was totally unaware.

More News
Until I went on vacation and forgot to take Chantix with me. A few days without it, we had a much more relaxed and better time. Then I realized this was the cause of my anger so I quit taking it. My biggest concern now is whether or not it has future side effects, like some other meds out there. Ten years from now, will there be any other side effects?

I'm surprised my girlfriend didn't leave me. Looking back, I realize I was depressed—but nobody from the VA was there to help me. And to this day, I still haven't heard from them. Do they even know how dangerous this drug is?

Obviously, the drug maker didn't study Chantix enough before it went on the market. It was apparent to me, even though I just took it for a short time, that there is something seriously wrong with this drug. I still have half of my prescription left and I don't intend to take anymore. I will hold onto the rest of it pending a possible lawsuit.

And I have almost managed to quit smoking, but if I continued taking Chantix, there's no telling what could have happened to me."