SUV Rollover: A Tragic End for a Young Woman

Laura Lynam, aged 17, was in the passenger seat of an SUV when it rolled over. The roof crushed like a tin can and the airbags didn't deploy—Laura was killed instantly. Tragic incidents like this make you wonder how vehicles are tested for car crashworthiness.

At 9.30 am on October 17, 2004 seven teenagers, including Laura, piled into a 2002 Cadillac Escalade- the girls were on a rowing team and were on their way to a crew race. The 16-year-old driver had taken her parents' SUV (unbeknownst to them) so that they could all ride in one vehicle. The SUV was big and heavy--two girls sat in the front, three in the middle seat and two girls were in the back.

The racecourse was at a river about 15 miles from the girl's house. They proceeded to drive down the Interstate 95 in Springfield, Virginia. They were in the middle lane cruising at 55 mph—there wasn't much traffic early Sunday morning. The driver decided to change lanes into the high speed lane. As the SUV moved into the other lane, the driver saw a car approaching fast in the left lane so she swerved back into the middle lane but overcompensated. It rolled over about four or five times, across the interstate to the right hand shoulder. 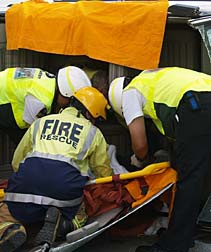 Laura's father, Terence Lynam, was at church when he received a message to go to the church office. "Laura died instantly from severe head trauma," said Terence. "The driver just lost control—nobody else was injured." The roof collapsed, falling in on Laura and neither the front or side airbags deployed. She was wearing her seatbelt.

"My wife was on her way down to the river—she was also going to be racing that day. I met them both at the hospital. It was brutal. Laura was our only daughter; she had applied to college just a few days before."

Terence knew the driver's parents. He talked to them and found out it wasn't the car she normally drove. " I wouldn't have wanted her friend to drive six girls in a heavy SUV; they get top-heavy and roll over," he said, " and there is an issue about the A pillar [the roof support on each side of the windshield] because it collapsed and the roof came down, crushing her."

The driver was charged with reckless driving but the judge decided it was improper driving and fined her $500. She was driving 65 mph when the accident occurred.

More News
Terence looked into the issue of liability of the manufacturer regarding the rollover. "I heard that the manufacturer (in this case, General Motors) fights hard and you would have to take a lawsuit to the court steps," he said. "Even if it got to court, they might not want to settle—you might have to go to trial because they don't want to set a precedent. They want to say it is the driver's fault."

He also found out that airbags are designed to deploy from a head-on collision and sometimes from a side impact. Airbag cases in roll-over situations don't have a "real" impact so they don't often deploy.

Because Terence did some research and believes that roll-over cases are hard to win by yourself, he didn't file a lawsuit--yet. "These cars are too top-heavy; they are so high up off the road that one swerve shouldn't flip your car over," said Terence, "and I think a jury would agree." Maybe Terence will have his day in court. SUV roll-overs are another example of car crashworthiness failure. Isn't it about time manufacturers made their vehicles safe to drive?