As vehicle manufacturers are adding "new and improved" airbags—including side airbags and curtain airbags—to their vehicles (the NHTSA gave automobile manufacturers until 2012 to provide advanced airbags), these airbags are also causing accidents. While some airbags do not deploy in a collision, others deploy without the vehicle being involved in an accident. 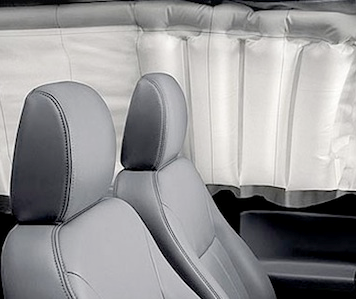 A Chicago woman was in the news recently when her side airbags "exploded" as she was driving down the road at about 25 miles per hour. Moments later, the steering wheel airbag exploded.

According to consumeraffairs.com, a driver of a Toyota Corolla 2007 was severely injured last June 2011, when his airbags didn't deploy. He contacted Toyota and "got the same answer from the other costumers: The impact was not severe enough for the airbags to deploy." He added that after reading so many complaints "Toyota should do something about it."

This new generation of airbags, known as "advanced airbags" are supposed to decrease the risk of airbag injuries. But they are not designed with children in mind and now there appears to be a new problem with sensors (airbag sensors note conditions such as seriousness of the crash and passenger size, posture, and proximity to the air bag, and automatically deploy the air bag at a higher or lower force or perhaps not at all).

More AIRBAG INJURIES News
The Safety Record Newsletter reported November 2011 that last May, General Motors issued a Technical Service Bulletin warning that, due to electromagnetic interference (EMI), when "certain electronic devices" such as computers, MP3 players and cell phones are placed in the front passenger seat of many recent models, the front passenger airbag indicator may illuminate, which would enable the airbag and activate the seatbelt reminder light and warning chime. In other words, your 1.5 pound iPad could activate the sensor.

One GM owner said that, if a passenger is seated in the right front seat with an electronic device in his or her lap, EMI may disable the airbag. So, if the sensor correctly perceives that an occupant is in the seat, then interference from the iPad will tell the sensor to turn the airbag off. In another complaint to GM, a front seat passenger holding an electronic device will cause the airbag sensor to turn off.

Airbag designers: back to the drawing board?

If you or a loved one have suffered losses in this case, please click the link below and your complaint will be sent to a personal injury lawyer who may evaluate your Airbag Injuries claim at no cost or obligation.
Request Legal Help Now

Posted by
Stephanie Findish
on November 9, 2011
2006 Saturn Vue - The airbag is regulated from the front passenger module. If the passenger side module for the seat heater stops to function (as mine did) you lose all airbags in the car (I have been told this by GM and 2 dealerships.) It does not make sense that because your butt warmer does not work, you lose all air bags. Is this safe? It will cost 1,500 to replace the module to fix the airbags. I don't have the money so the car I bought to protect me (I am disabled and can not wear a seat belt, doctor's written orders) I am not condemned to die because GM designed the car wrong. This happens in all the Saturn Vue's - check the internet.

Click to learn more about LawyersandSettlements.com
LawyersandSettlements.com - A trusted, independent legal news provider bringing quality news and information on legal cases and lawsuits filed in the United States of America to its readers since 2002. Over 650,000 legal help requests including Automotive accidents, Accidents, and Defective Product Cases have been forwarded to lawyers all across to the country.