Walter Savinovich, an Evolution Fresh driver, filed suit in Santa Cruz County Superior Court on August 7, alleging that Evolution Fresh and its parent company, Starbucks Corp. violated the wage and hour provisions of California labor law by failing to pay for time spent on call. The complaint alleges that Evolution Fresh drivers were not paid for time when they were required to remain on duty and use company-issued cell phones to communicate with managers before and after their scheduled shifts. In addition, the California labor lawsuit claims that Starbucks routinely deducted wages for meal breaks that drivers were not permitted to take and failed to pay overtime. The lawsuit seeks class-action status on behalf of as many as 80 current and former employees from the past four years. 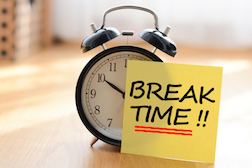 It is a well-established principle of California labor law that “On-call or standby time at the work site is considered hours worked for which the employee must be compensated even if the employee does nothing but wait for something to happen. ‘[A]n employer, if he chooses, may hire a man to do nothing or to do nothing but wait for something to happen.’ (quoting the U.S. Supreme Court decision in Armour & Co. v. Wantock (1944).

Every employee who works more than five hours must also be allowed an unpaid break of at least 30 minutes for meal time. If the employee is not relieved of all work duties during that time, including an obligation to remain on-call, California labor law requires that the time be paid.

More CALIFORNIA LABOR LAW News
But what about employees who must remain on standby while at home or otherwise away from the workplace? California state law is more generous than federal law in these situations. Workers may be entitled to compensation when they are away from the work site, but on-call, if being on-call significantly limits their ability to engage in non-work activities.

How much limitation is significant? This is the developing edge of the law that is being explored in the growing number of on-call wage lawsuits in California courts. If the Savinovich lawsuit is certified as a class-action, that issue is certain to be front and center. Other lawsuits involving roughly similar facts are also pending against Nordstrom and its subsidiary Trunk Club, Amazon and Dolgen California, LLC, which operates as a subsidiary of Dollar General Corporation.