In this day and age, discrimination should be the dinosaur in the workplace. But in the last few months alone, California seems to have stepped back in time. California labor lawsuits, from disability to pregnancy employment discrimination, have been recently filed. 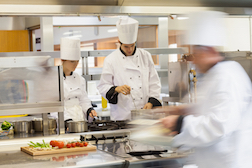 When will these dinosaur employers wise up and realize discrimination—particularly in the state of California—is not tolerated and will likely cost them plenty in court, not to mention hurting their business?

California Pregnancy Discrimination
For instance, a recent pregnancy discrimination lawsuit may affect Thomas Keller’s bottom line at his famous restaurants: Per Se in New York and French Laundry in Napa Valley. A former Per Se employee claims that Keller promised her a job at French Laundry (TFL). So she moved, along with her husband, to the Golden State—only to be denied a job allegedly because she was pregnant. Allegedly or not, armed with that knowledge, chances are Keller may lose a good chunk of customers. A pending discrimination lawsuit would be like crossing the picket line to his eatery.

Vanessa Scott-Allen and her husband packed up and moved in March 2016. She was scheduled to begin work the following month. Fortunately for Scott-Allen she kept a note from Keller that reads, “Thank you Vanessa! May your warmth, grace and impact shine just as brightly at TFL as it has here.” (Note to any employee: keep all documentation, no matter how frivolous or inconsequential it may seem at the time.) Upon arrival, she was told her position was “no longer available”.

According to the Napa Valley Register,Scott-Allen seeks $5 million in damages for “fraud and deceit, sex discrimination, violation of pregnancy disability leave law, negligent misrepresentation, breach of implied contract, wrongful termination and failure to prevent discrimination, as well as violations of labor codes and the California Family Rights Act.”

The California labor law explicitly states that before or after taking time off from work, employers are also obligated to make reasonable accommodations for pregnant employees such as modifying work duties, transferring the employee to a less strenuous position, or providing a modified work schedule. An employer’s failure to accommodate the pregnant employee is only excusable where the employer can prove that the accommodation would be an undue burden. And an employee most emphatically cannot be fired for being pregnant!

California Disability Discrimination
A former Home Depot worker sued the retail giant this past July in Santa Clara for disability discrimination, retaliation and wrongful termination. Guadalupe Carbajal suffered a workplace injury that restricted her to pushing and pulling 10 pounds, standing up to 30 minutes per hour and minimal stair use, no squatting, kneeling or climbing ladders—as per her doctor’s orders. According to her complaint, Carbajal’s supervisor neither let her see a doctor until the day after her injury, nor did she provide Carbajal with paperwork for a medical claim until 20 days after the injury.

But the supervisor didn’t accept the doctor’s restrictions, so Carbajal continued to work through the pain of her injury. By July Carabajal told HR that her medical restrictions weren’t being honored, but Home Depot denied her request to be transferred to another position. (She worked as a merchandizer.) A new supervisor sent Carabajal home on disability and that’s the last she heard from Home Depot, despite several requests to return to work.

More CALIFORNIA LABOR LAW News
Carabajal’s lawsuit claims that Home Depot “refused to engage in any meaningful discussion about the disability, as required by law… Instead, they chose to fire her even though they were aware the disability would not interfere with her ability to perform the essential responsibilities of the job,” said her attorney Jason M. Erlich of McCormack and Erlich, a San Francisco-based employment law firm.

California labor law protects employees from employers who refuse to hire employees with a disability because of the employers’ perception that the employee could not do the work. Law Firm Newswire states that Carbajal is seeking lost wages, benefits, damages for emotional distress and attorney’s fees. She is also asking for an injunction against the defendants from engaging in the unlawful practices detailed in the complaint.
READ ABOUT CALIFORNIA LABOR LAW LAWSUITS

If you or a loved one have suffered losses in this case, please click the link below and your complaint will be sent to a discrimination lawyer who may evaluate your California Labor Law claim at no cost or obligation.
Request Legal Help Now

Posted by
Patsy Murdock
on November 7, 2016
I filed a gender discrimination complaint with EEOC over a year ago and EEOC has done nothing but give me the run around. My case is a clear case. There was only two applicants myself a woman and a male applicant that applied for a Custodial/Safety management position. They hired the male who had no experience in Custodial work. Two months later they fired him. I have spoken to EEOC many times and they just keep giving my case to one male right after another. Gender discrimination is very rampant in the work place. I can't even find an attorney that can help me fight the system