A jury in El Paso, Texas, has awarded the families of two migrant workers killed in a 2005 bus crash a record $132.5 million in damages. Reagan Sahadi, the attorney representing the family of one of the workers who died in the crash, says the jury was disgusted by the actions of a greedy and irresponsible bus company, and the award telegraphs a warning to bus company operators who cut corners and exploit workers from Mexico. 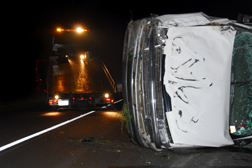 "The owner of the Los Paisanos bus company testified at trial that he had inspected the van two weeks before the accident and it was in excellent condition," says Sahadi. "But as he was speaking, the jury was looking at pictures of the van showing bald tires and no seat belts. I think that was the hook and that's what really ticked them off."

The horrific circumstances of the accident may also have turned the jury. Survivors of the accident said people were screaming and scrabbling to find seat belts as the van fishtailed along the snowy, high-altitude road, finally careening into a guard rail at 75 mph near Lochbuie, Colorado.

Sahadi, who represents the Caraveo family, says 67-year-old Ascension Ramirez Caraveo, was pinned under the van. He suffocated to death within minutes as he listened to sirens and screams. "The way he died, it was just awful," says Sahadi, from the firm of Wigington, Rumley & Dunn.

A passerby saw what he thought was a suitcase flying 80 feet through the air. When he stopped to help, he discovered it was the body of the second victim, Teresa Acevedo. "She was crying out in Spanish that her chest hurt and she died two hours later in hospital," says Sahadi.

Los Paisanos and its sister company Lindo Mexico are non-incorporated and carried a maximum $5 million in liability insurance. Since insurance cannot be discussed before a jury, it had no way of knowing that the $132.5 million it awarded could never be delivered to the plaintiffs.

Even though Los Paisanos' insurance will pay only a small portion of what the jury believed the families were due there, the decision speaks loudly.

Sahadi speaks with passion and clarity about the case. "These are poor migrant workers from Mexico," says attorney Reagan Sahadi. "They are literally the backbone of our economy."


Reagan Sahadi holds a B.A. in Business Administration from St. Edward`s University and a J.D. from the University of Houston Law Center. He joined the firm of Wigington, Rumley & Dunn in 2008.

If you or a loved one have suffered losses in this case, please click the link below and your complaint will be sent to an accidents lawyer who may evaluate your Bus Accident claim at no cost or obligation.
Request Legal Help Now