As far as Accident Articles go, this one is a tough go given the loss of life, and the ferocity of the April 10 collision in California between a FedEx twin trailer and a motor coach carrying a group of prospective university students and their chaperone to a facilities tour at Humboldt State University. 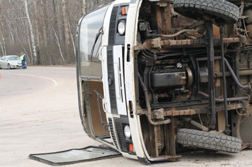 There is also little doubt that many survivors, or the families of those who perished, will be contacting accident lawyers as answers to last week’s horrific and tragic crash slowly come to light.

There are many unanswered questions - not the least of which is what may have been the catalyst for the twin-trailer FedEx truck to lose control, cross a 60-foot median and slam into the coach bus traveling in the opposite direction along Interstate 5, killing both drivers and five others on the bus. More than 30 were injured, many seriously.

The crash adds more fuel to the debate over the allowance for twin trailers on the nation’s highways. The FedEx truck involved in the crash was a power unit pulling two linked trailers.
Safety advocates for years have been lobbying to have the so-called twin rigs banned, due to safety concerns.

While police have yet to confirm, two eye witnesses claim they saw fire engulfing the rear of the power unit as it crossed the median before hitting the bus. Various pundits are speculating that the fire, if indeed present as the witnesses claim, may have been the underlying cause for the driver to lose control. Advocates for the banning of twin-rigs note that towing dual trailers adds a much heavier load to the power unit - the engine. The accident happened in California, a state known for high temperatures.

Could the FedEx truck have become overheated, causing the fire? If there was a fire, could the flames have melted brake lines? While there were more than 145 feet of tire marks left from the coach bus as the driver, seeing the tractor trailer careening across the median, attempted to slow and swerve out of harm’s way given the truck’s trajectory - there were no tire marks showing that the FedEx driver tried to apply the brakes. If there was a fire, might the FedEx driver been overcome by smoke?

Other questions: should all medians have collision barriers? Currently, according to various reports, medians less than 50 feet in width are required to have crash barriers. The median between Interstate 5, where the tragic accident happened, was 60 feet wide.

The National Transportation Safety Board (NTSB) is investigating, and it has indicated it could take weeks if not months to resolve the cause of the crash. The black box in the bus was thought to be intact and is expected to wield some clues. However, the data recorder in the FedEx truck was destroyed.

It should also be noted that while the NTSB has the authority to recommend safety improvements, such as improvements in fire avoidance for coach carriers, the Board has no authority to require such recommendations. It’s up to manufacturers and operators to implement suggested improvements.

The April 10th crash killed five students, three adult chaperones and both drivers. Those who died were at the front of the bus, which served as the collision point. Some passengers were reportedly ejected from the bus at the point of impact before the bus burst into flames and quickly erupted into a very hot fire. Those who died were burned beyond recognition and required dental records to positively identify.

Was the FedEx truck on fire before the collision?

Investigators told CBS affiliate KCBS that it would be hard to determine whether or not a fire had broken out on the FedEx truck given the almost total destruction of the truck, together with the destruction of the on-board data recorder, which did not survive the impact and fire. While two witnesses have told investigators they saw fire engulfing the rear of the truck cab as it crossed the median, investigators are looking for more witnesses to corroborate what they saw. The witnesses were driving a rented car that was clipped by the truck just before it impacted the coach bus, killing 10.

According to the Insurance Journal (4/14/14), FedEx is the world’s largest cargo airline with 18,820 drivers on the ground and 14,703 vehicles within its ground freight fleet. Both FedEx, and the operator of the doomed coach bus, Silverado Stages Inc., carry a “satisfactory” rating, which is the highest rating achievable from the Federal Motor Carrier Safety Administration (FMCSA).

FedEx drivers traveled almost 1 billion miles in the past two years with 730 crashes, including 23 in which there was at least one death, based on data posted on the FMCSA’s website. The records don’t say who was at fault in the accidents. As for Silverado, its 142 drivers had been involved in two incidents within the last two years. Neither incident was fatal.

KCBS reports that the bus carrying the students and their chaperones had recently stopped for a fresh driver. As part of a routine investigation, both drivers will be investigated to determine lifestyle habits, work habits and history, and work schedules.

Toxicology tests would be conducted on both as well. According to the Insurance Journal, fluid extracted from the eyeball of the truck driver would be used to determine toxicology readings, if any, involving the FedEx driver.

“There are significant issues that the board has in regard to fatigue, in regard to distracted driving, in regard to motor coach safety, in regard to overall highway safety issues,” said Jim Hall, who was NTSB chairman from 1994 to 2001, and who now runs his own company in Washington, Hall & Associates LLC. “I certainly would have made a decision, were I still chairman, to send the team to this accident.”

The “team” Hall references is the so-called “Go-Team,” a group of investigators under the NTSB banner whose mandate is to investigate major accidents involving air, rail, and road.

Whether or not there was a fire on board the FedEx truck as the two witnesses reported - and what may have caused it - is just one aspect of what will most assuredly be a complex investigation. A spokesperson for FedEx, Shea Leodeanu, told the Insurance Journal that FedEx was not aware of any cargo on the twin rig that would have caused or contributed to the blaze after the crash. There appeared to be no reference in the statement to the possibility of a blaze occurring prior to impact.

“It was in flames as it came through the median,” said Bonnie Duran, one of the witnesses in the rented sedan, in comments made to KNBC Television. “It wasn’t like the whole thing was engulfed. It was coming up wrapping around [the driver].” Part of the investigation into the health and condition of the truck driver just before the crash will be an attempt to determine if the driver inhaled smoke that may have been generated by a fire on board the truck.

The FedEx truck was a dual trailer. Advocates want them banned

Investigators found there were no skid marks left from the FedEx truck on either the pavement or the grassy median, on its way to the other side of Interstate 5 and the fateful collision with the bus.

Regardless of the outcome of the ongoing investigation, which also involves the FMCSA, the accident re-ignited debate with regard to the safety of double-trailers.

More BUS ACCIDENTS News
“There’s a lot of people that want to get rid of them,” said Aaron Brown, a risk manager at AQR Capital Management LLC in Greenwich, Connecticut, which had FedEx in its mutual funds in 2013. “There’s so much more potential for a serious accident when you’ve got two trailers hooked up to one tractor,” Brown continued, in comments published in the Insurance Journal. “It’s twice as heavy and the back can swing around or jackknife.”

Among those killed were a young couple having recently become engaged and one of two identical twin sisters. As fate would have it, the other twin boarded a different bus to Humboldt, and was not aware of the collision until after the group arrived at the university campus. The orientation tour was shortened, as a result of the tragedy. The crash happened on a stretch of Interstate 5 in Orland, about 100 miles north of Sacramento.

There were 44 high school students on the bus, according to reports, excluding their chaperones and the driver.

The investigation continues. Accident lawyers are standing by…

Posted by
oliver grant
on July 14, 2014
Why has one obvious possible cause been apparently ruled out: a deliberate attack? There was a chicago truck driver that drove straight into a CTA train station claiming he blacked out just as he got off the freeway exit. One former fedex employee in Houston used his uniform to break into his sister's ex-wife's house and shoot the entire family. Another GA fedex worker went on a shooting rampage. A former executive in New Hampshire told police he deliberately was trying to kill himself when he crossed the median and crashed into an oncoming car. Everything in this story is consistent with a suicide attack. Nothing else makes much sense.