Nancy J. was told that her baby suffered a chemical burn due to IV infiltration while she was in the hospital, but the burn was superficial. Apparently, calcium had leaked out of her vein and burnt her skin. One month later, the plastic surgeon told her that the burn injury might have caused nerve and/or muscle damage.

Nadia was born prematurely and was in NICU when she sustained the injury on her leg because of IV infiltration (This is where the IV catheter slides out of the vein and IV fluid is then infused into the tissues instead of the vein).

"I called the NICU three times that morning and each time the nurse was too busy to talk," says Nancy (not her real name pending a lawsuit). I asked them to call me back and finally in the afternoon the nurse practitioner told me that Nadia had a burn on her ankle but it was superficial and nothing to worry about. She also said that the plastic surgeon was going to look at it the following day." 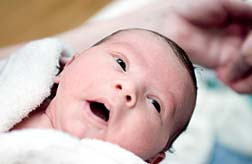 If it was only a superficial burn (which means that only the top layer of skin is burnt and should take a few weeks to heal), why was a plastic surgeon notified? Nancy was alarmed. She and her fiancé went over to the hospital right away.

"I wanted to see the burn," says Nancy, "but the nurse didn't want to unwrap it because it could cause infection and she also said it was just surface of the skin. I am young and a new parent and I don't even know what 'superficial' meant. They explained that the IV leaked because she is a 'preemie' and it happens all the time. Fluid leaked out of her vein and the calcium in the liquid burnt her skin. (And I also want to add that Nadia was on the IV due to a virus she picked up in the hospital.)

"Two weeks after she got burnt, it was time for her to come home. That is when I first saw how bad it was. The wound specialist had to show us how to take care of it. Even she looked surprised when the dressing came off. She didn't want to say it was bad (because she works at the hospital) but she did say that it was 'pretty bad'. I asked her if she graded this burn as 2nd and 3rd degree. She hesitantly told me that it was superficial. I looked up the definition of superficial and it's like getting a burn with a curling iron. But I knew it was worse. And I have pictures.

More News
When I took her home, every time I took care of the wound, she would cry. I had to remove the dressing, clean it with saline solution and then use a special gel pad and bandage it all up. It broke my heart doing this—I had to clean the burn twice a day. I just stopped last week, so Nadia was hurting for a good month.

My home nurse said that this type of burn heals from the inside out, so there will be a significant scar. She also said it definitely was more than superficial.

We took her to a plastic surgeon who said that it may have caused muscle damage and nerve damage but she also said 'I am not qualified to tell you that'. I called an attorney and he wants me to wait and see how well it heals. Everyone tells me that this can occur often in premature babies, but not to this extent. Thankfully I was able to get medical assistance but I am worried about her future—if there is any nerve or muscle damage. Thank God the burn isn't on her face."

Posted by
Haley
on January 3, 2017
I too have one of these burns on my wrist. I never knew it was a burn until I started looking into it. They had told my mother that the iv infiltrated and that was the end of it. I am 21 now and I use that hand to write so I have never done anything with the scar. My family has always told me to look at it as an identification mark. My friends notice it sometimes and go " what is wrong with your hand?" and I never remember I have the scar because it has been part of me my whole life. It is about two and a half inches long and 1.5 inches wide in some places but I never have pain with it, that I remember. I hope all goes well for you and your baby.
Posted by
Jane
on September 11, 2016
My premature babygirl has the same scar on her leg, she is 6 months old now and this scar is getting bigger as her leg grows. I worry about her being a teenager with the scar like that, how is she gonna put a swimsuit on? I'm not sure what can be done to make this scar less visible.
Posted by
carine
on June 10, 2016
I have the same problem. My baby was born with 10 pound and was burn deeply on his right foot and we did a skin craft . I cry every time I see the foot. The nurses lies to me too and they did not tell me the truth. I want to sue the hospital please I need her. We can discuss this together and I need help to handle this
Posted by
Micah Johnson
on October 20, 2015
My son is a preemie baby and we are going threw the same thing ! I would love to talk more with you on how you handled it and maybe compare pictures we are not sure what to do.
Posted by
Timothy
on March 15, 2014
I have a calcium burn on my wrist. But I don't think it is as bad as your baby's. I am 24 years old.