A study that was published recently by The Lancet has found that children who have sustained a burn injury that covers 60 percent or more of their total body surface area (TBSA) are at a much higher risk of experiencing severe complications or death, according to Medical News Today. 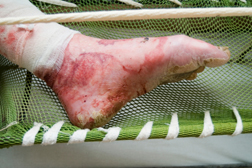 The news source reported that the authors of the study have urged the need for more attention to be given to such patients, as they suggested more vigilant and improved forms of therapy.

The study, led by by Dr. Marc Jeschke of the Ross Tilley Burn Centre at the University of Toronto, Dr. David N Herndon of the Shriners Hospital for Children and colleagues at the University of Texas Medical Branch, involved the assessment of 952 paediatric burn patients aged six to ten at the Shriners Hospital for Children, Galveston, Texas, USA, between 1998 and 2008, according to the news source. The research included patients with a range of burn sizes, including those with severe burns and individuals with only 30 percent of their body affected.

According to the news source, the researchers found that of the 13 percent of children who died, 123 of the 952 patients, those with less severe burns accounted for only three percent of the deaths, while those in the most severe category accounted for 55 percent.

More News
"We have established that, in a modern paediatric burn care setting, a burn size of roughly 60% TBSA is a crucial threshold for post-burn morbidity and mortality," the authors concluded. "On the basis of these findings, we recommend that paediatric patients with greater than 60% TBSA burns be immediately transferred to a specialized burn center."

MedPage Today reported that the study outlined a much higher threshold for poor outcome following severe burns than was formerly the case, but the authors also noted that the treatment improvements since 1998 have led to reduced morbidity and increased survival for the affected children.

According to the news source, this was a single-center study, which narrows the scope of the findings, as it may not be applicable to patients at other centers.