Burn Injury Victim with New Face Soon to Be Home

Dallas Wiens suffered a horrific burn injury in 2008 when he came into contact with a high-voltage power line while helping to paint the exterior of his church. The young father, literally, lost his face. Various images on the Internet and video posted on YouTube show a faceless Wiens without eyes, nose, lips or eyebrows—just a swath of skin where his face used to be and his signature goatee that survived. 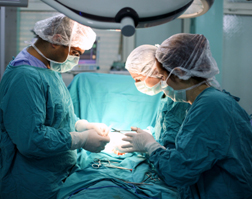 Today, America is Googling Wiens for a different reason: an attempt to see the man's new face following a 15-hour full-facial transplant in Boston.

Most associate a burn accident with fire—and fire continues to be the leading cause of horrific burns. But there are other causes and other types of burns…

A chemical burn can result from coming into contact with caustic chemicals that can burn the skin much in the same fashion as excessive heat.

Then there are electrical burns, the kind of injury suffered by Wiens in November 2008 after his head came too close to a high-voltage power line. CNN reports that doctors kept the man in a medically induced coma for three months while they performed various surgical procedures in an attempt to save his life.

Save his life they did. But they also knew that Wiens would hardly have a livelihood or much of a future without a face.

Thus, the burn injury victim received a new face from a donor in a 15-hour operation at Brigham and Women's Hospital. On Monday, both WBZ television and WBZ NewsRadio 1030 reported on the "coming out" of Wiens following the successful transplantation of a forehead, nose, lips, facial skin and underlying muscles extending from mid-scalp down to his chin.

More BURN INJURY News
Wiens is blind—he lost one eye in the accident and he can detect only minimal light perception in the other—but he can now smell. He can also speak with some difficulty, although that will improve over the next year or two as the nerves in his transplanted face reconnect over time.

Viewing the report from WBZ in Boston May 9, the transformation is remarkable. The electrical burn victim looks nothing like he did just a few months before.

Wiens told The Associated Press last year that one of the reasons for his agreement to try the still relatively new surgical procedure was his daughter, who turns four years of age in June. The burn injury victim's surgery, costing $300,000, was funded by a grant from the Department of Defense.

If you or a loved one have suffered losses in this case, please click the link below and your complaint will be sent to a personal injury lawyer who may evaluate your BURN INJURY claim at no cost or obligation.
Request Legal Help Now