Kevin says he doesn’t regret joining the army—even though he has been diagnosed with PTSD and traumatic brain injury (TBI). But he does regret not fighting harder for benefits. “The VA doctors should have done more testing for my TBI—instead I was released from the army for PTSD,” says Kevin, age 33. “I told him that he was full of it—how can PSTD cause short-term memory loss?” 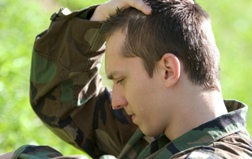 Kevin’s last VA doctor said all his problems are accumulative from PTSD (and PTSD symptoms do include memory loss). Kevin may be one of many veterans whose brain injury was mistaken for PTSD. The VA doctor then referred Kevin to a therapist who diagnosed TBI after 10 sessions of therapy. Even doctors don’t always detect a brain injury, according to one TBI lawyer.

“My therapist said I have all the signs of TBI,” Kevin explains, “especially short-term memory loss. You can tell me something right now and a minute later I might not remember you even asking the question. I have a hard time processing and responding to information. The therapy was supposed to get other parts of my brain functioning and taking over where this short term memory part doesn’t work anymore. She gave me a bunch of exercises, talked with my wife and showed me how to keep track of everything in notebooks and on the computer—and that’s how I get by at work.”

(Kevin works in sales for a roofing company. His wife helped him answer questions during this interview.)

Kevin later saw a civilian doctor who said nerve damage was caused by TBI. Kevin often loses motor ability in his limbs. “They go to sleep, from my shoulders to my finger tips and my hips down to my toes,” he says. “It is a crazy feeling and I have no control. Sometimes it happens when I am driving; if it happens when I am on a roof I just stay up there and move around until I get motion back—I don’t want this to happen on a ladder.”

Kevin was in the military for 10 years. “All my injuries happened during combat in Iraq and Serbia,” he says. “During my initial entry into combat I was thrown out of a truck and smashed my face up against a rock and broke my jaw. It was a hairline fracture so I wasn’t hospitalized. Just pain, that’s all.

“Then we were involved in one of the largest ambushes in the Iraq war against US soldiers, where 39 of us got hit in one ambush, outside of Baghdad. Grenades were thrown in and I got banged up but I was good enough to fight until everything ceased and then I passed out from exhaustion. I woke up a few hours later…

"I think the TBI happened as an accumulation of all these incidents—with my head getting bashed around. One doctor said I should have been tested earlier to see if they could track the bruising and any scar tissue. But my VA doctor simply said that 'brains heal fast enough that you don’t even need to see that stuff once they are healed.’ But when will it heal—when will I get my memory back?

"You can’t get a second opinion from the VA but you can get medical attention from an outside source, which you have to pay for. I have insurance through my employer so I have to get seen by a specialist in order to fight this VA evaluation of PTSD. I will get this done; it’s just a matter of taking time off work to do it. Then I will have enough documentation to file a claim with a brain injury attorney.”

More BRAIN INJURY News
Kevin gave his employer medical records and they hired him, knowing he has a TBI and PTSD. Although his dream of becoming a police officer or firefighter after his army contract was over is now just a dream, he feels fortunate. “This roofing company has changed our lives-- for me, my wife and three kids,” he says. “We were struggling to get by every day but getting this job has turned things around financially. I’ll find a way to overcome my problems but I won’t be able to get on a roof forever. And I want my benefits back from the army. I would like to be at least compensated for that: Give me what I deserve and don’t deny my TBI.

"Guys recently released from the army get anywhere from 40-50 percent of their wages in disability pay for PTSD. I only got 10 percent, along with a lump sum payment because I still had four years on my contract. Now I have been asked to pay all that money back to the army. I am still trying to figure out why I have to pay it back. If you ask me, that is ridiculous. They say my brain is fixed, but it isn’t. Sure, I can manage my daily life, but it ruined a lot for me.”

Posted by
Jennifer Campbell
on October 31, 2019
I went through something almost identical. I deployed by myself to Iraq 2004-2005. No Unit or First SGT to monitor my activity or provide documentation when I redeployed.
I received a TBI Oct. 14, 2004 when 3 suicide bombers entered the Green Zone. I was in close proximity to 3 explosions and received percussion injuries.. I was in Iraq to augment the 31st CSH. The COC denied me treatment. My paper work did not get back to the states. Doctors where I was stationed in OK acknowledged I had A TBI but refused to take responsibility. My records were altered more than once to make it look like the TBI came from somewhere else. (It happened in Iraq, Army doctors told me it happened maybe in a car wreck, I had never been in a car wreck). I believe this was the same time when every soldier returning from Iraq was required by regulation to be screened for a TBI. I had TDRL Doctors and even their COC cover my TBI up. I was placed on TDRL only for PTSD.
While in Iraq I also received medical radiation as a nurse working in ICU. We did not have lead aprons for protection and were exposed to radiation through out the day. Now I am on thyroid medication the rest of my life.
I also received a inhalation injury and now have asthma that requires inhalers.
I also had muscular skeletal injuries. I have constant pain.
None of the above injuries were rated when I went through MEB. I was only rated 30% for PTSD. When the doctors acknowledged my injuries they raised my % to 70 and placed me on PDRL with no further exams. I only received minimal treatment for these injuries by the VA about 3 years after retirement.
I have documentation of these injuries and I am seeking legal counsel.