Were you looking for NFL Concussion Lawsuits lawsuits?
Traumatic brain injury (commonly known as TBI), which results in an impairment of cognitive abilities or physical functioning, is a brain injury caused by an external physical force. Brain trauma may produce a diminished or altered state of consciousness and it can also result in the disturbance of behavioral or emotional functioning. Closed brain injury occurs when a person receives an impact to the head from an outside force, but the skull does not fracture or displace. Both types of brain injuries may be either temporary or permanent and cause partial or total functional disability or psychosocial maladjustment.

Send your Brain Injury claim to a lawyer who will review your claim at NO COST or obligation.
GET LEGAL HELP NOW

Traumatic brain injury, sometimes referred to as TBI or brain trauma, is a sudden physical damage to the brain. It does not apply to brain injuries that are hereditary, congenital or degenerative, or brain injuries induced by birth trauma, toxic substances, or disease-producing organisms. The American Congress of Rehabilitation Medicine stated that the injury is manifested by one or more of the following: The Centers for Disease Control and Prevention estimates that in the United States, there are currently 5.3 million individuals suffering from a traumatic brain injury that will have life-long effects.

Traumatic Brain Injury can be caused by shaking (as in Shaken Baby Syndrome), a direct blow to the head (concussion), or impact from a bullet, knife or other sharp object that forces hair, skin, bone and fragments from the object into the brain (penetration injury).

When a person receives an impact to the head from an outside force, but the skull does not fracture or displace this condition is termed a "closed head injury". The brain swells but has no place to expand, thus causing increased pressure within the skull which can force brain tissues to compress, causing further injury. 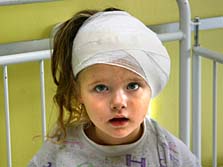 When a person suffers severe physical injuries, the focus is often on the visible injuries. Closed head injury to the brain is one of the most overlooked and sinister outcomes of traumatic injuries. Broken bones and cuts are more visible and can heal, but the unseen injury of a bruised brain may never fully recover.

A brain injury may have a devastating effect on the victim's relationships, occupation, income and quality of life. Although he may look just fine physically, friends, family members, coworkers and employers may not understand or sympathize with an injury they cannot see.

A brain injury can affect the very essence of a person. Personality, memory, reason, and temperament may all be affected in debilitating ways by brain trauma.

Acquired Brain Injury (ABI) occurs when there is an internal problem such as air deprivation or a medical condition that causes neurological damage to the brain. Like traumatic brain injury, the causes of ABI can be sports-related. For example, defective SCUBA equipment can lead to oxygen deprivation; or, while not frequent, an avalanche during ski season can lead to asphyxiation. In both instances, there may be negligence involved that ultimately led to the brain injury. The symptoms and effects of an ABI are often the same as those of a TBI. Some common causes of an ABI are:

Springfield, MA: The estate of late NFL player Aaron Hernandez on Thursday filed a federal lawsuit against the National Football League (NFL) and the New England Patriots, alleging that defendants failed to protect Hernandez from traumatic brain injury within the context of active play in football games, all the while knowing that repeated blows to the head could lead to chronic traumatic encephalopathy (CTE), an irreversible brain disease.READ MORE
Football Legend Paul Hornung, Now Suffering from Dementia, Files Suit Against Helmet Maker Riddell

With two weeks and counting to the Super Bowl, and with the NFL concussion settlement on the plus side of $870 million still fresh in our minds, comes word of a brain injury lawsuit from a fairly obvious genre of professional sport.READ MORE

Posted by
delores m carlisle
on June 13, 2017
I developed a closed injury in 1998, although I had swelling and 3 day with eyes open and completely peralised,went to neuro surgen said shed done all she could she released me with no further direction. I completely lost all memory before accident until 2014 and 2016 felt my sence of self againmy elementary school daughter was was all I had to rerember all motor skills and how to think and invent a new life. I continue to see mental health but do not have the ability to understand things for sometimes up to 2 yrs. since in 2014 (who ive gone to many times previous,) got upset when I started shaking and said I shouls have told them about said injury," how would I know they don't do theyre homework. they put me into surgery for arterial biopsy where I could have died long story short I still need help understanding and I tell them what I need and I was yelled at ignored and and called a lier.much more.same thing my medicare is not covering all alse my head still gets tight and I shake and seem to be going backwords.mri frustrating ,how many times will I be subjected and still not seeing a neurologist
thank you
Posted by
Ginger Allen
on October 27, 2016
My daughter Holly is 26 years old. She still lives at home with me. I stayed at home while pregnant with her and stayed in bed from June to August 1990. I lost 3 babies before Holly. The doctors put me on a heart monitor I had at home that told me when I was going into labor. I had to go to the hospital 7 times before she was born. Each time I went they gave me a shot of Breatene to stop the labor. On 8/24/90 I went in at 4:30 am. That day they gave me several shots of Breatene to stop my labor. But at 7:45 before I left the hospital I went into labor. Holly came 7 wks. early. Ever since she was born she had trouble sleeping. She cried all the time. She had trouble eating. Holly has been to so many drs. specialist known to man. She has taken so many different drugs prescribed by drs. Now they say she is Schizophrenic. We have no one in our family like that. I blame it on the Breatene. Holly can't drive. She does date. She has no life like a normal 26 year old. It is really heartbreaking. Can you help us? Please call asap.
Posted by
Anonymous
on January 23, 2014
I suffered TBI while on the job, I t has now been 3 years, and continue to have several issues ...question, I had legal counsel when meet w/insurance spokes person, and received a partial disability payment and that's it..ive had 2 surgerys since the injury and both where caused by the TBI. .anyway I just don't understand why I haven't even received disability!!I waz sole support er of family of six!!now struggling
Posted by
Oregon
on June 9, 2013
Work injury! Because it is a workman's comp injury, I am not getting the help I need. Doctors are skating around it, and I keep going back and forth to see my PCP! Eating up medicare money, and I am progressing and I'm scared to death! My injury brain injury, right side face, neck & mid back! I am now disabled.