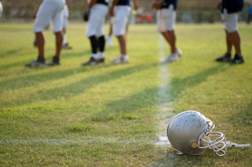 According to the Chicago Tribune (11/6/13), Bobby Douglass, a former quarterback for the Chicago Bears, and John Cornell, a former player for Northwestern who was part of professional training camps, allege they developed brain damage linked to injuries they sustained while playing football. Their lawsuits allege that multiple concussions increased their risk of permanent brain damage and chronic traumatic encephalopathy, a condition linked to multiple brain injuries.

The NFL has already agreed to settle lawsuits brought by more than 4,500 players for approximately $765 million. In agreeing to the settlement, the league did not admit any wrongdoing.

Chronic traumatic encephalopathy (CTE) is a degenerative brain condition reportedly caused by head trauma that has been linked to depression and memory problems. In the past, it could only be diagnosed after the patient has died, but ESPN (11/7/13) reports that scientists have now diagnosed it in living players. According to ESPN, Tony Dorsett and other players were diagnosed with signs of CTE.

Although the focus concerning CTE is mainly on football, anyone who suffers repeated brain trauma could potentially develop the condition. And even if a person does not develop CTE, there are other serious conditions associated with brain injuries, even those stemming from one incident.

More BRAIN INJURY News
The Centers for Disease Control and Prevention note that every year at least 1.7 million traumatic brain injuries (TBI) occur, either alone or alongside other injuries. “A TBI is caused by a bump, blow or jolt to the head or a penetrating head injury that disrupts the normal function of the brain,” CDC notes. Furthermore, TBI is a contributing factor in approximately 30 percent of all injury-related deaths in the US.

Not all brain injuries are caused by a hit to the head. Recently, a federal appeals court upheld a $10.7 million award given to Sharon Bethel, whose husband was given the wrong medication during surgery at a Veterans Affairs Medical Center. The Denver Post (11/4/13) reports that the patient was given a paralytic instead of a sedative and had trouble breathing. Because of the lack of oxygen to his brain, Mr. Bethel suffered severe brain damage. The US Department of Justice appealed an earlier award of $10.7 million, but the appeals court upheld the decision.

Posted by
joanna lane
on November 24, 2013
I'm glad you point out that 'there are other serious conditions associated with brain injuries, even those stemming from one incident.' One such condition is PTHP, which is massively underdiagnosed see http://bit.ly/1aaznvZ ("lethal time bomb that can be caused by a head injury"). This is treatable, so people really should be told.