The estate of late NFL player Aaron Hernandez on Thursday filed a federal lawsuit against the National Football League (NFL) and the New England Patriots, alleging that defendants failed to protect Hernandez from traumatic brain injury within the context of active play in football games, all the while knowing that repeated blows to the head could lead to chronic traumatic encephalopathy (CTE), an irreversible brain disease. 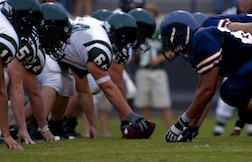 The New York Times (09/21/17) reported that of 111 brains of former NFL players examined posthumously, all but one exhibited signs of CTE. There has been much research into the relationship between CTE and repeat concussions in recent years, including concussion and CTE lawsuits. However, a conclusive diagnosis is only possible after a player dies and the brain is harvested, and examined.

In the case of Hernandez, the pathologists who examined his brain were surprised to discover the level and intensity of CTE in the brain of someone so young. Hernandez, according to The New York Times, was just 27 when he took his own life this past April. And yet, his brain presented with evidence of CTE akin to someone well into his 60’s, rather than in his late 20’s.

Dr. Ann McKee is identified in the report as the pathologist who examined Hernandez’ brain. McKee, chief of neuropathology at the VA Boston Healthcare System and director of the CTE Center at Boston University, noted that Hernandez showed signs of “early brain atrophy” and “classic features of CTE in the brain” that included deposits of tau protein in the front lobes of the brain in nerve cells around small blood vessels. Dr. McKee also found “large perforations in the septum pellucidum, a central membrane,” of Hernandez’ brain.

The advanced progression of CTE in Hernandez in someone so young may prompt his estate’s legal team to also go after The National Collegiate Athletic Association (NCAA) and the University of Florida, where Hernandez played football before he was signed to a multi-million dollar contract with the New England Patriots. The supposition is that Hernandez’ CTE had its beginnings prior to his relatively short NFL playing career.

The role of coaches in the high school, college and university system has also come under scrutiny in recent years over an historic mantra of toughness that saw players at one time sent back into the fray – or begging to ‘go back in,’ in spite of exhibiting concussive symptoms and not prevented from doing so.

An example of youth sports related concussions being put to the test legally is Mann v. Palmerton Area School District, Case No. 16-2821, US Court of Appeals for the Third Circuit. According to court documents the plaintiff and central figure in the lawsuit, Sheldon Mann, suffered a brain injury when he was returned to an active practice in November, 2011 even though he was alleged to have been exhibiting signs of a concussion. The plaintiffs pursued civil rights claims against the coach, identified as Chris Walkowiak, alleging that the defendant should not have returned Mann to the field and was thus liable for his injury.

A lower court noted there was sufficient evidence of culpability for Mann’s injury under a state-sponsored danger theory of liability according to the constitutional right in question: “to be free from deliberate exposure to a traumatic brain injury after exhibiting signs of a concussion in the context of a violent contact sport.”

The Court, however, noted this constitutional right wasn’t clearly established in 2011, when the incident is alleged to have taken place (November of that year). And while a jury could find that the injury was foreseeable, and that the coach “took an affirmative act” that made Mann more vulnerable to danger, Walkowiak was entitled to qualified immunity from liability because it must be “sufficiently clear that a reasonable official would understand that what he was doing violates that right,” the Court said. The three-judge appellate panel with the US Court of Appeals for the Third Circuit was unanimous in upholding the ruling of the lower court, dismissing the civil rights claims against the football coach.

That ruling may not apply to a potential lawsuit in the Hernandez case, in that the constitutional right applied to the Mann case is confined to the state of Pennsylvania.

And there are other potential issues with a Hernandez lawsuit, in that Hernandez is not listed amongst the players who opted out of a class action lawsuit against the NFL. According to CBSsports.com (09/22/17) a massive concussion lawsuit brought against the NFL automatically included members of the CFL Players Association whose careers concluded prior to July, 2014 (Hernandez’ last game with the Patriots was January, 2013). Those players who qualified for representation in the lawsuit forfeited their right to sue the NFL and related parties unless they triggered an opt-out clause.

It appears as if Hernandez did not opt out. The multi-million dollar lawsuit is brought by Hernandez’ estate and Shayanna Jenkins Hernandez to benefit and provide for the late player’s daughter Avielle Hernandez, age 4. “By not opting out, his daughter is now bound by the terms of the settlement,” said David S. Weinstein, a former assistant US attorney in comments to USA TODAY Sports, as re-published and posted by CBSsports.com. “The NFL and Patriots have an easy road to dismissal,” he said.

More NFL LAWSUIT News
Hernandez was a bright light in the football world until it came crashing down in January, 2013 with his arrest for the murder of former semi-pro football player Odin Lloyd. Observers of his alleged erratic behavior and aggressiveness as a young man on, and off the field point to early-emergence CTE as a possible association.

Convicted of Lloyd’s murder, Hernandez was handed a life sentence – although he was acquitted on charges related to the deaths of two other men. Just days following that acquittal, according to The New York Times, Hernandez was found dead in his jail cell.

His death was ruled a suicide.

The lawsuit brought by his estate is Hernandez v. National Football League et al, Case No. 1:17-cv-11812, in the US District Court for the District of Massachusetts.

If you or a loved one have suffered losses in this case, please click the link below and your complaint will be sent to a drugs & medical lawyer who may evaluate your NFL Lawsuit claim at no cost or obligation.
Request Legal Help Now