On February 24, victims of deadly 2017 and 2018 California wildfires filed a lawsuit in San Francisco Superior Court seeking to hold former officers and directors of PG&E liable for failing to protect them from the harm that followed from the 2018 Camp Fire and the 2017 North Bay Fires. In addition to devastating personal and property loss, many California homeowners whose homes were burned also found themselves the victims of bad faith insurance denials. Justice John Trotter (Ret.), Trustee of the PG &E Fire Victim Trust v. Lewis Chew seeks to redress these harms in a direct way – by suing those responsible for putting corporate profits and their own financial interest ahead of their fiduciary duty to protect public safety. 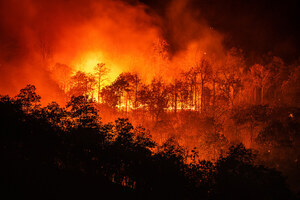 
The trust, which represents the interests of more than 61,000 victims of the 2017 North Bay Fires and the 2018 Camp Fire, has sued 13 former PG&E executives and board members, arguing they should be held personally responsible for destruction sparked by the utility’s faulty electric equipment. The gravamen of the Complaint is that these executives should have known and often actually did know that years of neglect put thousands of Californians in danger.

PG&E’s bankruptcy led to a $13.5 billion award for people and businesses with losses from the 2017 and 2018 fires as well as a 2015 blaze in Butte County. Payouts have not yet reached any of the individual wildfire victims.

Still, many of those who suffered personal and economic injuries will not be made whole. Some insurers resist fire loss claims, especially in a year with thousands of claimants. If an insurer unreasonably denies or intentionally undervalues the claim, that may constitute bad faith insurance.

Policyholders who have already suffered catastrophic losses do not always pursue bad faith insurance lawsuits. A lawsuit like Trotter, which targets the decision-makers who might have prevented the harm, opens another avenue for homeowners who have been affected by wildfires.


Dispatch reports from November 8, 2018 described a fire under the high-tension power lines near the Feather River and Poe Dam. Aided by high winds, the Camp Fire spread quickly. By the night of November 8, an estimated 80 to 90 percent of the nearby town of Paradise was destroyed. Residents of the town had only moments to gather their families and attempt to escape the blaze. Many could not escape and died.

The Camp Fire was not completely contained until November 25 and not until it consumed more than 153,000 acres and destroyed nearly 14,000 homes and more than 4,800 additional structures. The blaze ended with 88 confirmed dead and nearly 200 still listed as missing.

The California Public Utility Commission’s report found that the Camp Fire was caused by the utility’s failure to inspect and maintain a C-hook on a transmission line, which failed, causing the pole, wires, and other equipment to fall to the ground.


The 2017 North Bay Fires started on the evening of October 8, 2017. At the peak, there were 21 major wildfires that burned 245,000 acres. Eleven thousand firefighters battled the fires that forced 100,000 people to evacuate, destroyed an estimated 8,900 structures and took the lives of 44 people. The North Bay Fires reportedly caused insurance claims of $9.4 billion.

At the time of the North Bay Fires, PG&E failed to install and implement a power shutoff system like that used by similar utilities. Such a system was urgently needed because the company had failed to maintain a vegetation management program. During high winds, trees made contact with the distribution lines and caused fires.

Part of a Pattern?


The 2018 and 2017 fires, by themselves, killed over 100 people, injured many more, and damaged or destroyed tens of thousands of homes. The Complaint also lists a total of 17 other California wildfires dating back to 1981, all of which were attributable to PG&E’s failure to invest in and maintain safety equipment and systems. This long-standing pattern of conduct, the Complaint argues, amounted to a breach of the common law duty of care.

More BAD FAITH INSURANCE News
Specifically, regarding the 2017 North Bay Fires, PG&E allegedly had a duty to exercise reasonable care and to follow PG&E’s own criteria for shutting power off. PG&E had failed to comply with CPUC regulations for keeping vegetation properly trimmed and maintained to prevent foreseeable contact with electrical equipment. Failing to do so, the company should have instituted and implemented a shut-off mechanism to prevent catastrophic fires.

Regarding the 2018 Camp Fire, PG&E similarly had a duty to exercise reasonable care and follow CPUC regulations regarding the design, construction, inspection and maintenance of overhead electric lines to ensure adequate service and safety. The company neglected to properly inspect transmission lines and tower equipment in order to identify equipment about to fail because of age, corrosion or material fatigue. Through the named officers and directors, it failed to provide a proper budget to allow PG&E to inspect, maintain and replace its equipment, or to institute a proper asset management program.