Neal removed asbestos from buildings in the 1980s. “We removed it as fast and as efficiently as possible, regardless of the fact that we were breaking the rules,” he says. “We left sites contaminated with asbestos because we were encouraged by our employer to do so.” 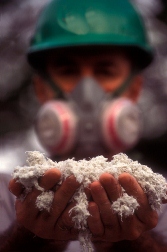 Neal, age 54, worked with and around asbestos in one form or another since 1985. He removed asbestos from churches, schools, apartments, and commercial buildings. North Star Abatements, the company he worked for, was busy and its employees were getting paid exorbitant amounts of money. At the same time, the employees were told that it would cost too much to remove asbestos correctly. (Neal says the company went bankrupt soon after he left, due to asbestos and contractual lawsuits.)

“We knew about asbestos and we got paid a lot of money to remove it, which is why we did it,” says Neal. "Like a lot of companies, we weren’t removing it like we should have.

"We knew that we didn’t remove it properly—we didn’t use adequate amounts of water. When asbestos fibers are wet they are heavier than air and will fall to the ground. But the stuff we left behind was airborne. We also left asbestos in dirt crawl tunnels. It was easier to leave asbestos in the dirt than bag it and remove it—this way was cheaper, easier and faster—faster being the operative word."

We pulled the Asbestos over our Clients’ Eyes.

"Nobody complained. We worked in such a fashion that our clients just believed us when we said we were done. I was the project supervisor and it was my job to get clear air samples that showed the air had acceptable levels of asbestos after the job was done.”

Neal says that he has told this incident to a lot of people, but not to anyone officially.

“This was an accepted and encouraged practice at our company. At the time I didn’t care--but I do now. Being dishonest was the reason I left North Star. I developed a conscience and could no longer leave places contaminated.”

Neal worked in the asbestos industry for 27 years. He went in for x-rays every few years as a precautionary measure—especially because paper respirators, which are now illegal to use around asbestos, were the only safety equipment issued. He was diagnosed with asbestosis last month.

“Now the joke is on me,” Neal says. "Right now I have a dry cough and shortness of breath. And I’m concerned; I’m worried how much longer I have. And my wife is worried."

Before Neal removed asbestos fort North Star, he worked from 1980 until 1985 at North Star Demolition. “Part of this interior demolition job—I have friend who worked with me back then who reminded me of this just last week—was ripping off insulation from pipes to salvage the metal,” adds Neal. “Of course that insulation was asbestos. And my friend can attest that we did that. We had no safety gear, no protection whatsoever. So far my friend is OK but I have two other friends I worked with who died from asbestosis.”

Neal has been teaching asbestos classes for seven years. He says that anyone who wants to disturb asbestos has to go through some kind of training. And depending upon how much they disturb depends on how much training they need.

More ASBESTOSIS News
“I train people in the proper methods of removing or inspecting asbestos—not how we did it,” he says. “ I am surprised at the lack of knowledge most of my students have. Many of them think that asbestos use is illegal. Wrong. We still import 1,000 tonnes per year from Canada! You can’t use it in schools but you can buy products that have asbestos—it hasn’t been banned yet.”

Neal is seeing his doctor this week; he has no idea how much his medical bills will cost. There is no cure for asbestosis, but it can be treated.

“I’m not a big proponent of suing, but I feel that I was abused and taken advantage of back in the 80s—because of my youth and ignorance,” says Neal, “so I would like to see a monetary claim. I admittedly could have left the business and we knew that the way we removed asbestos was illegal. But if we didn’t like it there was the door. We were unskilled laborers, swallowed up by the promise of big money. Now I’m paying for it but with my health.”

Click to learn more about LawyersandSettlements.com
LawyersandSettlements.com - A trusted, independent legal news provider bringing quality news and information on all legal cases and lawsuits filed in United States of America to its readers since 2002. Over 250,000 legal help requests including Personal Injury Cases, Defective Product Cases, and Environment Cases have been forwarded to lawyers all across to the country.