According to Mike Crill, the Environmental Protection Agency (EPA) "screwed up big time" by covering up potentially asbestos-contaminated wood chips in Libby. "I know that millions of dollars have been spent cleaning up this town but that doesn't resolve the issue of people being exposed to asbestos," says Mike. "Government officials have downplayed asbestos mesothelioma since they came to Libby." 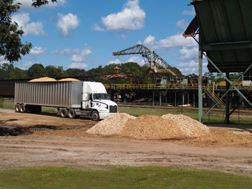 Mike has good reason to be concerned. "From 2001–2003 my family worked at the former Stimson Lumber site and in 2004 the EPA told the people of Libby that they took 16,000 soil samples from all over the area," he says, "but they said the tests didn't warrant any concern." However, just one fiber of deadly tremolite asbestos is potentially enough to cause concern.

"After the EPA said they didn't find anything to be concerned about, I requested the University of Montana to test the bark and in one sample they found millions of fibers—in just one gram of bark," says Mike. "That more or less blew the EPA out of the water. When the university made these results public, that opened up the Asbestos Pandora's Box. If that amount of asbestos was in one gram of bark, what does one tree contain? And what had my family been exposed to?"

Mike's next concern was where this alleged contaminated bark went to. He says that wood chips were shipped all over the country as recreational and playground bark. KPAX News reported that some of the woodchips were used in public places such as parks. And if it couldn't get any worse for the people of Libby, some of the residents used large piles of woodchips and mulch in their gardens.

Why didn't the EPA make public its results of asbestos wood chips back in 2007 when it found out the contaminated wood chips were being sold by a local economic development official? And why has it come to light now?

U.S. Sen. Max Baucus called for an investigation into the wood chips after The Associated Press reported how the alleged asbestos-contaminated wood chips and bark had been sold and widely used as landscaping material by government officials and residents of Libby. In July, the EPA went back to Libby for another round of testing, in an attempt to gauge the health risk.

"EPA needs to understand it has a responsibility to earn Libby's trust and that means going above and beyond to keep folks informed," Baucus said. "Priority number one is making sure folks are safe, and these new tests will help us figure out if the wood chips are dangerous and whether more steps need to be taken to protect the community." According to Mike Crill, not much protection has ever been done…

More ASBESTOS MESOTHELIOMA News
"My understanding is that the EPA is not in the process of cleaning up Libby," Mike adds. "I believe the Corps of Engineers has taken over the cleanup—but what do they know about cleaning up a town? I know that millions of dollars have been spent but there is no concern about the children and their future, and that the fibers in these wood chips are the cause of mesothelioma—a horrible death."

On August 31, 2011, KAJ News reported that EPA officials received results for six out of the nine bulk samples of wood chips they tested, two of which tested positive for asbestos. "It's a single fiber sample result that we've gotten from those samples, which is in the .0002 range, and is very low levels," said Mike Cirian, an EPA official. Questions still need to be answered, namely this: Is asbestos safe at any level? Not according to the World Health Organization and health officials worldwide. And not according to Mike Crill.

Posted by
mike crill
on June 25, 2013
June 25, 2013 and no one has done a thing to warn,inform and protect those being exposed to the asbestos bark that is in childrens playgrounds and yards all over this country. WHY there is no concern to locate where this deadly Tremolite asbestos went or hold anyone accountable for this screw up...the exposure continues and so does killing children. This drives me crazy so many are ignorant to this concern for the sake of those we leave behind. In Libby Mt we only kill them. Someone please stop this.
Posted by
Mike Crill
on September 9, 2011
Hi Jane and hope this finds you doin well. I want to than you for the awesome story on the bark issue. And I want to thank you for also being concerned about this deadly issue that has become a nitemare for millions today.It may be too late for millions exposed today but it is what we do today that I hope will better tomarrow...for those we leave behind...our kids and theirs. One person can make a difference and saving one life from this deadly exposure...is just Gods will for his children. I have one grandson and my only 4th generation Crill and he will never breath the deadly air of Libby Mt. Will he ever breath Tremolite asbestos?? I don't know and maybe yes but I can and will go to my grave knowing that Libby killed three generations of my family tree...Libby will not kill mt 4th. I guess I can live/die, with that and if I can stop one children from moving to Libby...this is what I do...while EPA sells Libby as safe. Its like I said...when you find 530 million asbestos fibers in one gram of bark...what is in that one tree and then the forest and then, who is being exposed. The Forest Service in Libby has a "warning info" for anyone using the forest, like lay plastic down and use wood that has no bark,etc etc...I would expect them to say stay away since they too know how deadly the forest is.never ending huh.Again Jane, thank you for doing what you are doing and for whom and why...saving lives/children by telling the truth and getting the truth out their..is the best we can do to educate/warn We the People from something that kills them. God Bless and take care. Got more stories...lets keep in touch.