Asbestos Mesothelioma: "It's the most horrible death you can imagine"

Dean Herreid is a teacher and part-time fire chief in Libby. He was diagnosed with pleural plaque, a progressive and excruciatingly painful lung disease caused by asbestos exposure. He didn't work around asbestos, but he was exposed to it on the baseball field in Libby, where he played between the ages of eight and 12. 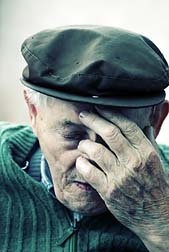 Herreid is just one of hundreds of people providing evidence in a court case against the now defunct Libby asbestos mine owned by WR Grace & Co. For more than half a century Libby produced 80 percent of the world's vermiculite asbestos. And they produced a product called Zonolite insulation. The problem was the vermiculite contained a highly carcinogenic type of asbestos called chrysotile.

According to a report in the UK paper, the Guardian, at least 200 people out of the town's population of 2,600 have died from asbestos exposure, and more than 1,000 are ill. Moreover, there is one new case of asbestos-related illness diagnosed every week in people who either worked directly for the mine or are family members of miners who live in Libby.

A pulmonologist engaged in the trial on behalf of the plaintiffs apparently told the jury that because asbestos mesothelioma and asbestosis can take as much as 15 to 30 years to manifest, he doesn't expect to see the last of the new cases until 2030, maybe longer.

The lawyers representing the people who have died or become seriously ill from asbestos have put together millions of pages of documents and x-rays of diseased lungs they say prove that WR Grace knew in the 1960s that the dust was killing its miners. Worse, the people in charge at the company also became aware over time that families in the town were becoming ill. Asbestosis and asbestos mesothelioma were affecting the entire community, and not only did WR Grace not intervene, they allegedly sought to suppress the information.

The court case, taking place in the town of Missoula, near Libby, is a result of hundreds of private lawsuits filed against WR Grace, alleging the company knew about the dangers of the asbestos it was producing and did nothing. Consequently, the US Justice Department indicted WR Grace and put 5 senior executives on trial.

How Did Asbestos Sicken an Entire Town?
Asbestos produces hook-like, glassy fibres that can easily become airborne. Once airborne, the asbestos dust becomes trapped in people's hair, clothing, and worst of all their lungs, eventually causing lethal asbestos mesothelioma. Workers at the Libby plant said the air was cloudy and thick with airborne particles. And even though they were given masks to use, they clogged up within minutes, making them impossible for the workers to breathe through.

The miners brought the dust home unknowingly on their clothing and it was then breathed in by their families, eventually causing them to become fatally ill as well. According to a previously published interview with Gayla Benefield, who sued WR Grace after her mother died, "A miner knew if he was killed his family would be taken care of," she said. "But they never thought for a moment they were harming their children or their wives. Then people started coming forward with lung problems who had nothing to do with the mine."

As for the community, the mill at Libby that produced the Zonolite insulation reportedly spewed out more than 2 tons of asbestos every day, so people living in the town were also exposed to the toxic dust. This caused an epidemic of lung disease among the residents. Reportedly, there were piles of vermiculite left lying around the town that the children used to play in, while clouds of asbestos dust polluted the air.

Today, many people who are ill in Libby are in their 60s and 70s. But a child of 13 has also been diagnosed with asbestos mesothelioma. According to a local nurse, Kimberly Rowse, interviewed by the Guardian, death from asbestos lung disease is horrible. "It's the most gruesome death you can imagine," she said. "It takes every effort to get a little air. Eventually they are gulping like a fish out of water."

More ASBESTOS MESOTHELIOMA News
The Libby Montana mine was condemned then closed in 1990, too late for hundreds of people who had worked at the mine and the plants, and who died before their time because of asbestos related disease.

Now, the executives are on trial, fighting for their lives. How they can mount any kind of plausible defence is mystifying, especially given the fact that the rate of lung disease in Libby is between 40 and 60 times the national average. How does that happen without anyone knowing?

What is clear, however, is that the town of Libby has seen and continues to see more than its fair share of death and disease. The cause is asbestos produced at the WR Grace mine. If the executives on trial are criminally convicted, they will go to prison for up to 15 years each.