"My doctor says it's a miracle I'm still alive," says 65-year-old John B., who worked for Certainteed Pipe Products in his early twenties. "I worked with concrete pipe made with asbestos and never even heard of respirators—we just wore little paper masks." 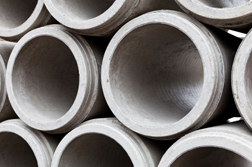 John continued to work, hauling oil and different products for a tanker company, but about six years ago he complained to his doctor about a pain in his back. "After taking x-rays my doctor asked if I had ever worked with asbestos," John explains. "At first I said, 'Of course not—I've never been around the stuff,' then he showed me the x-rays and pointed out some scarring on my lungs. Wait a minute, the more I thought about it, I remembered that I worked for Certainteed.

"Certainteed made concrete pipe; the raw material that contained asbestos was like baking powder. I ran a forklift and when I picked up the pipe, the wheels kicked up dust; it was like driving down a dirt road and I breathed that dust full of asbestos fibers. We were given a little paper thing to wear over our noses that got saturated with your own sweat after a while. It was a huge place, completely covered in dust. Water sprinklers were overhead—I guess that was an effort to keep the fibers down.
I didn't know about asbestos 40 years ago, but these companies knew way back then about the hazards, they just didn't tell us.

"And Certainteed certainly didn't give us respirators!

"I was recently diagnosed with pleural plaques, which is benign right now, but since my diagnosis, more spots showed up on my lungs. My pulmonologist said they have better equipment now, and that's how they just found something like a little piece of tin foil in my lungs.

"I filed a workers' compensation claim and I'm just about to reach a settlement with defendants Certainteed and their insurance company, Travellers Insurance. They've been postponing my suit for almost four years; I know it isn't going to be much of a settlement, but if my disease progresses to asbestosis or mesothelioma, Workers Comp said I could file a completely different claim with a mesothelioma-asbestos attorney."

John might be wise to find an asbestos attorney sooner than later: pleural plaques is an irreversible scarring to the lining of the lungs that brings with it an increased risk of developing other asbestos-related diseases.

And here's something else: The more John thought about his time at Certainteed, he remembered that his roommate died from lung cancer five years ago. Could there be a connection? "Arthur, my roommate, drove me to work every day and picked me up at night," he says. Did asbestos from John's clothing kill Arthur?

More ASBESTOS MESOTHELIOMA News
CertainTeed Corporation has been named as a co-defendant in multiple cases of alleged asbestos exposure nationwide. In May 2010, a Los Angeles jury awarded $208 million to the wife of a retired repairman of asbestos-containing cement pipes manufactured by CertainTeed. She developed mesothelioma as a result of laundering the clothes of her husband. Her attorneys successfully argued that she developed mesothelioma due to the proximity to his clothes, which likely held asbestos dust from her husband's work. Both CertainTeed and her husband's employer were responsible for damages.

Certainteed included asbestos in the manufacture of its best-selling construction materials throughout the 20th century, and some products were made with asbestos up until the late 1980s, including CertainTeed Asbestos Cement Pipe. Construction workers of all kinds, including forklift operators like John, run a significant risk of exposure to airborne asbestos fibers, especially when they were not given protective gear to wear, such as respirators.