"Monte was my older son; he was only 51 when he died last month from lung cancer," says Frances Majette. Monte was a mechanic in the Navy and he worked on tanks in Kentucky and Fort Hood. "He was in the Navy for four years and at this time he worked on the fire control system and I believe this is where he was exposed to asbestos. He was a tank turret mechanic."

His mother adds that Monte had no respiratory problems before he went into the Navy. He worked on a naval ship from 1985 to 1989.

"Monte spent four weeks in the VA hospital then he was transferred to the cancer unit—where he died 10 days later. It came as an awful shock to all of us. For the past year, he continually went back and forth to the VA hospital. He was diagnosed with lung cancer last December, 2006. He never married but left behind four siblings and me, his mother. 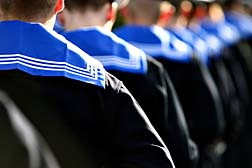 "After Monte got out of the Navy he got a cooking job at a restaurant in Virginia Beach and he was getting along well. He really enjoyed his job and he drove about 55 miles to work each day. He only worked during spring and summer. But after he worked there a few years, his health began to decline. He was a secretive person and for all I know, he might have known back then that he had cancer.

In September, 2007 he sat the whole family down at my house. 'I have something to say and I don't know how to put it; the doctor said I have lung cancer and it is terminal,' he told us.

I believe he inhaled asbestos during that time on the ship. He slept there, worked there and breathed there for four years. It is really stressful for us to talk about him; if you have lost a loved one, you would understand."

More News
Monte lost his voice last year but not before he told his sister, Carol Freeman, that he had been exposed to asbestos. "He didn't talk to us much," says Freeman. "He was the oldest and only lived here for short periods, being in the military. We didn't really get to know him until he was dying. I was his caretaker. But I do know that he had to go down into those tanks to clean them. He said that was the cause of his lung cancer. He went away so fast..."

According to the Environmental Protection Agency (EPA estimates, over the past hundred or so years, asbestos has killed more than 259,000 people in the US alone. And more deaths are anticipated. Among all the carcinogenic products, natural and fabricated, only tobacco ranks higher in number of deaths.

Most of its victims won't even know what caused their death because they didn't know what they were exposed to, unlike tobacco. And the time of exposure and illness is usually longer than ten years. Asbestos-related disease is a creeping killer, a hideous poison.