The Attorney General of New York this week hit computer chip giant Intel with an antitrust lawsuit, alleging unfair marketing and business practices in an effort to shut out competitor Advanced Micro Devices (AMD). The lawsuit was launched Wednesday. 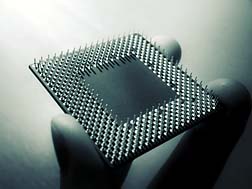 Andrew Cuomo cites Intel for its alleged practice of using large rebates and co-marketing arrangement to keep major providers of personal computers such as Dell from moving to, or increasing business with rival AMD.

Intel remains a huge juggernaut in the compute chip business, commanding about 80 percent of the market. The much smaller AMD has long been struggling to increase its own footprint. According to a November 4th story in the New York Times, AMD's fortunes began to turn around in 2003 when it began selling a new line of chips that proved to be superior in design and performance to that of Intel.

The products succeeded in opening doors for AMD into the server market, a segment that delivers higher profits than that of the home PC.

The lawsuit, filed in Delaware, is best illustrated by an exchange of correspondence between Michael Dell, of 'Dell' fame—and Intel chief executive Paul Otellini. According to the New York Times Dell was taking a licking in the computer market at the hands of competitors using the new, superior AMD chips. While continuing to be a loyal supporter of Intel, Dell grew tired of losing business and allegedly threatened a switch to AMD.

More Antitrust News
Intel's Otellini reminded Dell that Intel had paid Michael Dell's company more than $1 billion in the previous year. "This was judged by your team to be more than sufficient to compensate for the competitive issues," Otellini allegedly wrote. Dell subsequently delayed buying AMD chips and Otellini later emailed a colleague to say that Dell was "the best friend money can buy."

"Intel has used illegal threats, coercion, fines and bullying to preserve its stranglehold on the market," Cuomo said at a news conference Wednesday. "We intend to stop them."

Mr. Cuomo argues that Intel's behavior curtailed innovation in the industry and forced consumers and businesses to pay higher prices for computers.

Documents cited in the lawsuit show that Dell executives turned to Intel for payments to help them meet or surpass Wall Street's expectations for quarterly financial results. When Dell finally gave a nod to AMD, Intel reduced its chip rebates for the company by $600 million.

It was noted in the New York Times story that both AMD and IBM have invested billions of dollars in chip manufacturing plants in New York.