“Not Tonight Dear, I Have AMS Transvaginal Mesh” 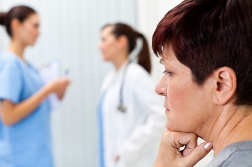 “My husband wants to leave me because I can't have intercourse without pain,” says Carol, from Los Angeles. “I have been in pain since having this procedure back in 2009 and my urinary incontinence has worsened considerably. As you can imagine not having sex has also caused stress, anxiety and depression for both of us. I am at my wit’s end and my doctor won’t take out this transvaginal mesh. I have complained to him so many times - I think that he is also at his wit’s end.”

LawyersandSettlements has been interviewing women with AMS transvaginal mesh complaints, including loss of consortium since 2011. Last month, PBS on its “Need to Know” program (March 22 episode) interviewed a South Dakota woman with the same problems, different transvaginal mesh manufacturer.

Dr. Emily Senay, PBS medical correspondent, discussed whether the FDA is adequately protecting the public regarding its medical device review process and used transvaginal mesh as an example of a product that is fast-tracked to the marketplace. “Too many balls have been dropped,” said Dr. Greg Curfman, executive editor of the New England Journal of Medicine, during the PBS episode. “I think that there are too many of these complex devices that have made it to market without clinical testing.”

By airing this topic, PBS has raised a huge awareness about transvaginal mesh products and how so many women - and their partners - have suffered after surgical implantation of these devices.

More AMS TRANSVAGINAL MESH News
Linda Gross, in her PBS interview, said that she asked her doctor what can be done if her body rejects the mesh. Answer: We simply go back in and take it out. She likens removing the TVM to pulling bubble gum out of her hair. After 22 surgeries, bits of the mesh are still adhering to tissue, which has grown in and around the mesh. Doctors have only been able to remove parts of the mesh.

She and her husband tried to call the manufacturer with no success. They finally hired an attorney, and filed a lawsuit (Gross v. Gynecare Inc., Superior Court of Atlantic County, New Jersey, Atl-L-6966-10), claiming permanent pain, suffering and disability, and her husband claimed loss of consortium. The couple was awarded over $11 million in damages.

Attorneys are praising PBS for airing a program about TVM. However, if TVM was deemed newsworthy a few years ago, it could have prevented many women from suffering. If and when transvaginal mesh creates problems and you are sexually active, it is going to be life-changing. Thousands of women are suffering disastrous results and attorneys predict thousands more will suffer.

Posted by
With held
on April 7, 2013
Your NEWS crackers me up! I had the avaulta mesh (2 of them) placed in me in 2007, that's been almost 6 years ago, and I haven been able to have sex with my husband since! There are a LOT worst cases of victims of surgical mesh out there!!

And I already have a lawyer in southern WV federal court, waiting on my trial June 11