Send your AMS Transvaginal Mesh claim to a lawyer who will review your claim at NO COST or obligation.
GET LEGAL HELP NOW 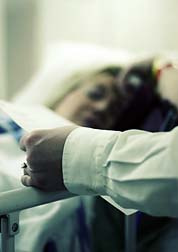 Many women have experienced physical problems such as mesh erosion, pain and infection, bleeding, scarring, pain during sexual intercourse, organ perforation and urinary problems that require additional treatment and hospitalization. As well, TVM causes psychological concerns such as sexual and intimacy problems.

In 2010, about 300,000 women in the US had pelvic organ prolapse (POP) surgeries, including more than 70,000 who received vaginal meshes. Approximately185,000 women underwent procedures in which mesh was implanted vaginally to treat stress urinary incontinence (SUI).

The FDA has received a number of adverse reports regarding AMS transvaginal mesh. These reports have resulted in a number of lawsuits filed against the company by women who may have been implanted with the following AMS mesh: In July 2011 an FDA advisory panel advised that TVM mesh, including AMS transvaginal mesh, be reclassified from moderate risk to high risk (Class III) of harming patients if it fails, and that move requires more studies to determine if it' safe and effective and will also require pre-market clinical testing for new mesh products. (Moderate-risk devices need only show that they are "substantially equivalent"to existing products.)

In May 2011, AMS signed a research grant to evaluate anatomical, functional and safety outcomes of two different treatments for vaginal prolapse, its goal of the study to "more thoroughly address vaginal and lower urinary tract function in addition to safety and efficacy", according to AMS.

In January 2012 an order was issued to AMS and other TVM makers, requiring them to study their products' risks in women who are implanted with the surgical mesh for urinary incontinence. AMS will study side effects such as mesh erosion, pain and infection. It must provide data on the effectiveness of transvaginal mesh implants for treating conditions like POP and SUI in women.

TVM attorneys claim that, if clinical studies had been required before transvaginal mesh devices were FDA-approved and implanted in women, these issues may have come to light much sooner for those patients who are now suffering the consequences.

More than 650 lawsuits have been filed against transvaginal mesh manufacturers, including American Medicals Systems, or AMS.

A California woman filed a defective medical device lawsuit against AMS, claiming its transvaginal mesh caused her injuries and health complications from POP surgery in 2009; the AMS lawsuit also claimed that AMS failed to properly warn consumers of the potential risks associated with their transvaginal mesh devices. Teresa Frazier, who filed the lawsuit in December 2011, claims that, after being implanted with a MiniArc transobturator tape urethral sling in September 2008, she experienced "recurrent pelvic pain, erosions, and recurrent infection of the tissue around the mesh."Frazier had revision surgery in 2010 but is still suffering from chronic pain and psychological problems.

A recent AMS transvaginal mesh lawsuit in Alabama claims that the AMS mesh Elevate is defective and has caused serious injuries.

Both AMS mesh lawsuits allege that AMS failed to warn patients about the potential side effects, and should be held liable for misrepresentation, negligence, and fraud.

American Medical Systems has filed a motion with the US Judicial Panel on Multidistrict Litigation (MDL) to consolidate all cases for pretrial proceedings on its transvaginal mesh in the US District Court for the Eastern District of Minnesota.

In October 2011 Judge Carol Higbee, who is overseeing the consolidated transvaginal mesh lawsuits, issued a scheduling order for the initial TVM bellwether trials, with the purpose to try cases that are representative of plaintiffs' claims generally and to determine the strength of plaintiffs' claims and the extent of defendants' potential liability. Judge Higbee set a trial date of November 5, 2012 for the first group of transvaginal mesh lawsuits.

If you or a loved one has suffered damages in this case, please click the link below and your complaint will be sent to AMS lawyers who may evaluate your claim at no cost or obligation.
Please click here for a free evaluation of your AMS Transvaginal Mesh claim
Last updated on Feb-10-12

Fort Lauderdale, FL: Encouraging women with AMS transvaginal mesh complications to have the device removed in order to ensure a bigger cash payout is unethical, to say the least. This scenario sounds as horrific as stealing kidneys from someone in a third world country. Actually, it’s worse, because the scene is Florida and it’s happening now.READ MORE
Transvaginal Mesh POP v SUI Warning

Dallas, TX: Margot has undergone three surgeries in an attempt to remove AMS transvaginal mesh she had implanted for stress urinary incontinence (SUI). She is outraged that the FDA reclassified transvaginal mesh as high risk only to repair pelvic organ prolapse (POP). And she is worried that her transvaginal mesh lawsuit may be delayed or reduced because of this action.READ MORE
Transvaginal Mesh and FDA Failure

Washington, DC: Too many women who have suffered transvaginal mesh complications wonder how it was ever approved by the FDA and why it took the agency so long to classify the mesh as a high-risk medical device. And when TVM victims find out, they are furious at both the FDA and the mesh makers.READ MORE

Posted by
Jennifer
on March 30, 2016
I definitely agree the amount they are offering is not enough. But having said that I'd still be happy if we could even get that. Recieving a letter stating a gross amount then waiting months for a check just to be told it could take years to actually get the check is unconsciousable. People have bills to pay or more surgeries to plan for. Tired and disgusted with the whole process.
Posted by
Idaho
on September 1, 2012
Along with the side effects listed I am suffering from wide spread infection throughout my body. I can fax to you a complete list of medical problems since having this surgery.