Attorney: It's Mind Boggling Ammonium Nitrate Was Used in Airbags

A new Takata-related airbag lawsuit has been filed against Honda and Takata, alleging a motorist was seriously injured when her airbag exploded during a car crash. Attorney Mo Aziz—of Abraham, Watkins, Nichols, Sorrels, Agosto & Aziz—is part of the team that filed a lawsuit on behalf of Serena Martinez and has been involved in other airbag claims as well. Aziz says that these lawsuits are the result of an inadequate recall. 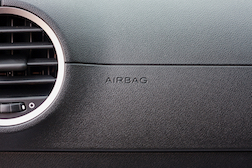 "Carmakers have issued recall notices, but if you take your car into the dealership, they don't have the parts," Aziz says. "It's an ineffective recall."

Millions of cars have been recalled due to a problem with Takata-manufactured airbags. The recalls affect a range of vehicles, including Honda, Mazda, and Lexus.

At issue is the use of ammonium nitrate as a propellant in airbags. Ammonium nitrate, Aziz says, is sensitive to changes in temperature. As temperatures shift above and below approximately 90 degrees Fahrenheit, the propellant expands and contracts, affecting its stability.


"Carmakers have issued recall notices, but if you take your car into the dealership, they don't have the parts," Aziz says. "It's an ineffective recall."
That change in stability can cause the ammonium nitrate to detonate, which is what has allegedly happened in some situations. When the propellant detonates, the inflator can rupture, which can send shards of steel flying into a vehicle's cabin and causing serious damage. If the shrapnel hits a person's chest or the neck in the wrong spot, the victim can bleed out.

Aziz recently filed a lawsuit on behalf of Serena Martinez, who was driving a 2002 Honda Accord near her home in Texas when a vehicle attempted to make a left turn in front of her. Martinez could not stop in time and the cars collided in what Aziz says was a "front-end, low-velocity collision." The airbag in her car deployed and ruptured. One of the shards of metal released in the explosion cased a severe and deep laceration to Martinez's chest.

More AIRBAG INJURY News
Initially unsure of what happened, Martinez reportedly got out of her car and was told by a passerby to lie down until paramedics came. Even following the accident, Martinez thought her blood was caused by the accident itself, not by an airbag problem But Aziz says the three holes in the airbag and a fragment of inflator on the seat indicated the problem was an airbag rupture. He also says if the fragments had struck Martinez three inches over it would have hit her carotid artery and likely killed her.

Martinez's lawsuit names Honda and Takata—maker of the airbag—as defendants. She will survive, although has permanent scarring and suffered emotional trauma. Aziz also recently represented the family of Huma Hanif—who was 17-years-old when she died after fragments from an exploding airbag struck her neck—in a lawsuit. That suit was resolved under confidential terms.

Posted by
Lilian Garrick
on December 12, 2016
What about airbags that do not deploy? Those manufactured by Autoliv and TRW have fitted cars made by Honda, KIA, Chrysler, etc. with non-deploying airbags since 1998 and these are equally as dangerous if not more and is already the cause of 2 deaths. In December 2014, I I was in a 2015 KIA SORENTO LX (with less than 17,000 miles) when it malfunctioned, drove off an embankment and ploughed directly into a pole; NONE OF THE AIRBAGS DEPLOYED crushing my vertebrae (broken back). My devastating injuries include spinal cord, neck, jaw, head & eye injuries as well as permanent disfigurement; I was hospitalized for 45 days. And now Autoliv has contracts to fit 25 million cars with these faulty devices to fill the void left by Takata?
Posted by
Joe marshall
on November 20, 2016
I owned a mazda protege..in 2009 And i got into a low speed collision in milford mass. The other car was only goin 12 miles an hour when it hit my front end and the air bag deployed. I had a bleeding from my fore head and a slight concussion. Peices of my steering wheel housing was im my hat..

Click to learn more about LawyersandSettlements.com
LawyersandSettlements.com - A trusted, independent legal news provider bringing quality news and information on legal cases and lawsuits filed in the United States of America to its readers since 2002. Over 650,000 legal help requests including Defective Product Cases, Accidents, and Automotive accidents have been forwarded to lawyers all across to the country.