Ron was holding on to the passenger side hand grip when the side airbags deployed after hitting another car. “I blame Ford for my airbag injury and faulty design. If not for the position of that grip I wouldn’t have broken my wrist,” he says. 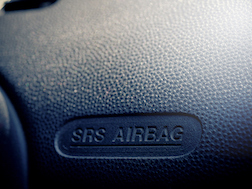 “My son was driving his 2012 Ford Explorer when we got involved in a multiple car crash last March—it was one of those blizzard wrecks where cars kept plowing into each other; driving conditions were terrible.” With heavy snow and an icy road, Ron told his son to veer into the median. Fortunately their speed was about 15 mph. When the Explorer slid into a car that had already stopped there, the airbags deployed.

“Everyone was fine in both cars except me,” Ron says. “The hand grip is there to hold but the airbag came down on the opposite side of the impact.”

Among airbag-induced injuries, the upper limb is most frequently involved, according to the National Institutes of Health. Injuries to the upper extremity and especially the hand can be caused directly by the airbag deployment or indirectly as the upper extremity is catapulted against the interior of the car. And the University of Michigan Transportation Research Institute determined after its investigations that fractures of the hand account for only 7 percent of the fractures caused by the airbag itself. But passengers exposed to an airbag deployment who sustained fractures from other sources were injured most often to the hand—almost 24 percent. In Ron’s case, his break was caused by a combination of airbag and hand grip, or the other source.

“The ER doctor said my wrist was broken in two places. They set it temporarily and told me that is how it would heal,” says Ron. “But the pain is still there and I don’t have all the movement back.”

Ron didn’t get involved with an insurance claim because his son was “maxed out” for medical claims and he didn’t want to be a burden. The car was a write-off, mainly because the driver side was dented beyond repair. As for the car they slid into, Ron says a couple had bought the Cherokee Jeep that very day and were delivering it to their daughter.

“I found out online that I’m not alone in this complaint,” Ron says. “Wrists have broken from this grab handle and there are airbags lawsuits involving the handle, but I think the lawsuits have been filed by more seriously injured people.”

More DEFECTIVE AIRBAG INJURY News
Justin Ziegler, an attorney in Florida says online that his client—and passenger in a car crash—was awarded $37,500 for a broken wrist. And another passenger received $135,000 for a wrist fracture after another car crashed into the car that she was in.

But Ron has also suffered financially. “I had to take an administrative position in my own company. I stage furniture in model homes and don’t have the strength or stamina to hold or carry about 100lbs of weight for any length of time,” he explains. So Ron is out-of-pocket because he has to hire an employee to cover that part of his work. And wrist breaks are more difficult to treat than others.

“I saw my doctor a few months ago for this pain in my wrist,” says Ron. “He took x-rays and the break healed but my range and motion has diminished and arthritis has set in already. So the Ford Company and their airbags has cost me a lot.”