Effective October 22, 2017 Mitsubishi will recall 66,000 Lancer and Lancer Evolution vehicles manufactured between 2004 and 2006. It is the second time these models have been recalled to replace faulty Takata front passenger side airbag  inflators. The first recall occurred in 2015 as part of an ongoing effort to prevent airbag injuries and to forestall airbag lawsuits. Nonetheless, the problems persist. The problem of repeated recalls, while vexing to vehicle owners, is only a small part of the unfolding saga. The bigger story is that the danger drivers face from minor accidents can be deadly. People who have been injured and those who act on their behalf have begun lawsuits in search of redress. 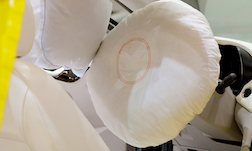 The 2015 Mitsubishi airbag recall was due to Takata’s unsafe use of ammonium nitrate in the inflators. In damp, warm weather, ammonium nitrate becomes unstable and can explode. An additional design flaw in the metal housing chamber meant that shrapnel could be sprayed throughout the passenger compartment. It didn’t take much. A tap was enough.

The 2015 remedy was to replace the defective part with exactly the same defective component. The only difference was that the ammonium nitrate was fresher and so presumably less volatile, at least for a while. Two years have passed, and Mitsubishi now asserts that it has a permanent replacement part made by Daicel Corp. that does not use ammonium nitrate.

Mitsubishi owners can be forgiven for some repeated recall fatigue, but they are hardly alone. In 2015 Takata and the National Highway Traffic Safety Administration (NTSA) estimated that as many as 400,000 of the replacement inflators would have to be replaced again. Toyota, Chrysler and Honda  together had to re-recall about 2.1 million vehicles after earlier recalls did not sufficiently address the problem.

In May 2016 the NTSA discovered that faulty replacement inflators, made without a chemical drying agent, would also eventually require recall. Then there were doubts about the desiccant itself.

In early 2017, Honda Australia had to replace nearly 600 replacement inflators in 2000 Civics. In August 2017, Mazda recalled nearly 80,000 cars and SUVs, some for a second time, to replace defective air bag inflators.

More DEFECTIVE AIRBAG INJURY News
At least 19 deaths and 180 injuries have been linked to exploding airbags. There are first-time recalls and second-time recalls and defective airbags that are beginning to show up in the secondary replacement market as parts for cars not subject to recall. There’s no end in sight, notwithstanding Takata’s dive into bankruptcy. Tens of millions of vehicles have been recalled worldwide, and what has been described as the largest and most complex safety recall in U.S. history continues to unfold.