Airbag Recall: My Subaru Passengers in the Back Seat

I drive a Subaru because it consistently gets top marks in safety from Consumers Reports and the insurance industry. It constantly gets "top safety pick” by the Insurance Institute for Highway Safety. And it looks good. But all these years that I’ve been driving a Subaru, it never occurred to me that there was a risk of airbag injury. 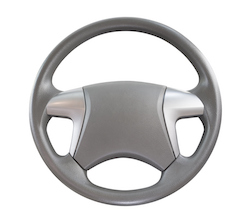 I’m the type of person who chucks most of my mail (to be recycled) that looks like a sales pitch or promotion of some kind, and a letter from my car dealership would fall into this category. So I don’t know what possessed me to open this—my second—owner notification letter from Subaru Canada, instructing me to “immediately contact your Subaru dealer so that they can order your inflator and arrange for an appointment to have the front passenger air bag inflator replaced with a new one.”

And in bold letters, it went on to say: “Until this repair is performed, it is our recommendation that you or anyone else operating your vehicle do not allow passengers to ride in the front passenger seat.”

I was curious about the immediacy of this RECALL WQR-53. After a bit of research and talking with someone at Subaru customer care, I discovered that my car is just one of over 50 million vehicles recalled. “We were notified by Takata as soon as they knew instances of injury. But Takata makes airbags for 11 different manufacturers so the initial injuries happened in Hondas in the southern states and they were the first to be recalled,” the nice customer service lady explained. So, I read between her lines.

I have been driving with an airbag known to be defective for at least a few years, and only knew about it because I happened to read the letter. It wasn’t sent to me by registered mail, neither was I notified by email and nor was I phoned. I asked her why it has taken so long to notify drivers about the recall. “We [The Ministry of Transportation] have to evaluate every vehicle and they began one year ago to send out recalls that are VIN-specific, starting with those cars that had injuries,” she told me. I could have killed my passenger!

I’m betting there are many drivers out there like me who don’t open their mail. And we’re busy; we don’t have the time to drive all the way to the dealership, sit around for a few hours drinking bad coffee and sometimes told to come back tomorrow because they are having difficulties with the installation (that happened to me, but with another recall unrelated to airbags).

I read about one person like me: Reuters (April 2015) reported that a faulty airbag inflator manufactured by Takata malfunctioned during a crash in Florida on March 20, injuring the driver. The airbag exploded and a piece of metal from the bag hit the driver in the neck, according to police and hospital reports. Honda Civics from that year were already subject to a recall, and Honda said that it had sent two notices to the owner of the car before the crash happened. The company said it was in touch with representatives (his insurance company?) of the injured driver to investigate the situation further. Reuters further reported that “Takata airbags have been linked to at least six deaths so far, all involving Honda cars”.

For more information, Car and Driver has a detailed time line of the recall. Here are a few snippets:


June 2014: Toyota is recalling 844,277 cars to swap out airbag inflators that can shoot shrapnel in a passenger’s face.

July 2014: NHTSA forced additional regional recalls in high-humidity areas including Florida, Hawaii, and the U.S. Virgin Islands to gather removed parts and send them to Takata for review.


Because I live in Canada and drive a Subaru, chances are slim that I’m not driving in high-humidity areas. This makes me pretty much at the bottom of the recall list. But what if I drove to Florida?

Reuters on July 28, 2017 reported that a 34-year-old woman in Holiday, Florida, was killed in a 2002 Honda Accord after the airbag ruptured during a head-on collision. While officials have not determined the exact cause of death, she is likely the 19th person to die from defective Takata airbags.

If I don’t go into the dealership and get my airbag changed, get into a car accident and my passenger suffers an injury from the faulty airbag, Subaru says they are not liable for any injuries. So, who is liable—Takata?

More DEFECTIVE AIRBAG INJURY News
I’m still waiting to hear back from Subaru. As soon as I disclosed to the nice customer service lady that I am a journalist, she would no longer talk to me. I was instructed to email and got the form reply:
“This email is confirmation that we have received your request and a Customer Experience Liaison will be working to get back to you with an answer as soon as possible…Because the majority of requests require research to resolve, it can sometimes take us up to 72 hours to respond, though we make every effort to get back to you as quickly as possible and most queries are answered within 48 hours.

If your inquiry is urgent in nature or if you prefer to speak with a Customer Experience Liaison directly, you may contact us via telephone at 1-800-894-4212 Monday through Friday 8:30 am to 4:30 pm EST.”

That’s not going to happen. In the meantime, my passengers will have to take the back seat.