Recent reports of airbag injuries suffered by a young woman in an older-model car that had been in an accident and returned to the road with a replacement airbag, together with media reports originating from Kansas City with regard to recycled airbags, points to an entirely new issue with recalled airbags, and accompanying airbag lawsuits. 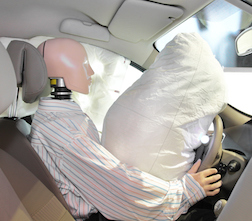 As most are aware, the primary issue has been catastrophic airbag failures associated with products manufactured by Takata, a Japanese company that recently faced criminal and civil fines together with an agreement to pay $1 billion to settle a multitude of lawsuits housed in multidistrict litigation. Allegations are that Takata, some time ago, switched to a less-expensive propellant for their airbags that risks becoming unstable over time, and in areas of high heat and humidity. Ammonium nitrate, the propellant used by Takata since 2001, can release with explosive forces far greater than that originally intended for airbags if, and when unstable. Airbags thus equipped have been known to deploy in low-impact crashes – or even without just cause – with the increased forces inherent with unstable ammonium nitrate ripping apart the airbag and inflator casing, sending pieces of shrapnel directly into the passenger compartment and causing severe airbag injury to occupants.

There have been at least 11 deaths in the US alone, and the Takata airbag recall has translated into the largest vehicular recall in US history. Takata is the largest supplier of vehicle airbags in the US, and beyond.

The young woman injured by the defective airbag had been driving a 2002 Honda, equipped with a replacement airbag salvaged from a 2001 Honda. Both were Honda Accords, but the airbag in the 2001 Accord, as Deb Hipp reports, had been covered by a recall but was never replaced. While the airbag in the report was not identified as a Takata product, it is known that Takata is a major supplier to Honda – and that 2001 was the year when Takata switched from tetrazolium to ammonium nitrate for its inflators.

While airbag recalls have focused on cars currently on the road and intact insomuch as they have not been altered from the time of manufacture, there has been little written about the recycling industry. To wit, when an airbag has deployed in a repairable vehicle and requires replacement, the replacement product is not always a so-called OEM part (Original Equipment Manufacturer). For that matter were the original equipment indeed be identified as a Takata product one may not desire, in this case, to have an OEM product that had been recalled and under a cloud of controversy, installed as the replacement part.

However, it gets even murkier with regard to recycled airbags that are removed – intact – by salvage yards and sold as less-expensive used components for the aftermarket industry. Often, the paper trail with the recycled component ends with the salvage yard. The result is that a consumer (or insurance company) seeking a less-expensive route to return a damaged vehicle to active use has no clue as to the origins of the cheaper recycled airbag.

“We absolutely will not use recycled airbags,” Newberry said. “When you talk about recycled airbags or aftermarket parts for the passenger restraint systems, they’re just bad news all together. You probably want to go back to the manufacture’s parts, the manufacturer’s guidelines and a list of items that need to be replaced whenever you have deployment.”

One can understand the motivation behind the quest for recycled parts: Newberry suggested that depending upon where and how many airbags deploy in a crash (side curtain airbags, side impact airbags, and so on) the replacement cost for airbags alone can be anywhere between $2,000 and $4,000.

The media report quoted comments made by Christopher Basso, of Carfax, who suggested in an interview that upwards of 750,000 airbags are replaced every year following an accident.

“It really underscores the importance of finding out if original manufacture equipment airbags were used or if they took a recycled airbag that may be on the recall list and could put your life in danger,” Basso said.

This is especially true when buying a used car. Knowing the vehicle’s history – including whether it had ever been in an accident, and the repairs required to rehabilitate the vehicle for continued use – is key, together with whether, or not OEM parts were used and whether, or not any recall notices had ever been issued for those parts. That’s especially important for airbags. In the case of Takata, a consumer may wish to avoid even a new Takata airbag given the airbag recall that has plagued the airbag manufacturer, auto manufacturer and the consumer at large.

However, few think in those terms. Most focus on the lowest price. And guidance over used or recycled airbags is murky at best.

The Automotive Recyclers of Canada states in an undated web posting that non-deployed OEM airbags “is an economical and safe alternative to new OEM airbags when airbags need replacing after an accident when proper care is taken to remove, store, catalogue, ship and install an airbag.” The post references guidance by the Canadian Council of Motor Transport Administrators (CCMTA) – guidance that includes careful cataloguing of information that may lead to an awareness of a prior component recall. Such information may yield information that a recalled component, such as a defective airbag may, or may not have been replaced – thus leading to a decision that replacement using such a product may be foolhardy, or ultimately dangerous.

However, there doesn’t appear to be any information on the CCMTA website with regard to specific recalls. With regard to OEMRepairInfo.ca, billed as ‘The Official Portal to OEM Repair Information for Canadian Auto Service Providers’ there appears to be no specific reference to airbag recalls of Takata products. The Collision Industry Information Assistance portal, amongst a host of various alerts, carries only a reference to a public safety alert with regard to defective rebuilt airbags manufactured by a company in Quebec and available since January, 1998. The Ministry of Transportation for Ontario (MTO) was identified as being aware of 1,600 vehicles in Ontario, Canada that were affected by the aforementioned. However, the alert was undated. And there is no mention anywhere of the Takata airbag recall.

More DEFECTIVE AIRBAG INJURY News
As reports of airbag failure in the US – and corresponding airbag lawsuits citing airbag injuries – continue to mount, a new wrinkle is emerging in the defective airbags portfolio that could have an effect with regard to ongoing litigation: to wit, used cars where there is no information as to whether, or not an airbag recall has been successfully undertaken – or if a recycled airbag falls within an airbag recall, now equipped as part of vehicle rehabilitation and putting an unwitting driver and passengers at risk.

Were such an airbag failure tragedy to occur, the litigation trail could go well beyond the manufacturer of a recalled airbag: the original vendor of a used vehicle who may have warranted the vehicle as safe and up-to-date with all recalls, a salvage yard having failed to catalogue a recycled component, or a vehicle restoration entity having failed to properly identify the salvaged product used to make a broken vehicle roadworthy once more…