Airbag injuries continue to dominate the conversation over a safety device that was once heralded as a cutting-edge augmentation to existing safety features such as lap belts and shoulder harnesses in vehicles, all designed to increase safety and minimize injury to occupants in the event of a crash. The reality in recent years, according to numerous airbag lawsuits, suggests that airbags are not infallible as safety devices and, in scores of cases, are alleged to inflict airbag injury when the device deploys incorrectly, or unexpectedly. 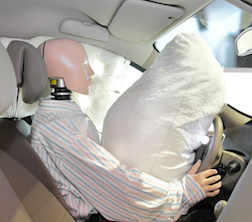 Specifically, the ammonium nitrate identified as the propellant in many of the defective airbags is alleged to become unstable when subjected to high humidity and changes in temperature, causing an often unexpected deployment at such an intense force that fragments from the ruptured casing can propel out into the cabin and seriously injure occupants, often with horrific consequences and sometimes, even death.

The potential for airbag injuries was referenced in an airbag recall in August from a manufacturer of high-end vehicles that largely flew under the radar.

Automotive News (08/05/16) reported an airbag recall by Jaguar LandRover involving 54,000 vehicles in the US. The recall involves 20,000 Jaguar XF sedans and 34,000 Range Rovers with regard to frontal passenger airbag inflators that may rupture. Driver-side airbags were not affected by the recall.

“Prolonged exposure to combined high heat and humidity can cause the affected inflators to degrade – at varying rates in different conditions – increasing the risk that the front passenger airbag module inflator housing may rupture and deploy abnormally in the event of a crash; potentially resulting in metal fragments striking the passenger or other occupants, resulting in serious injury or death,” Jaguar LandRover said in a statement.

The airbags were identified as having been made by Takata Corp., a manufacturer of side airbags, and curtain airbags as well frontal airbags found in a host of different vehicles – from low end cars, to high-end vehicles under the Jaguar and Land Rover Brand.

More DEFECTIVE AIRBAG INJURY News
The issue that contributes to airbag injury, according to an attorney interviewed by LawyersandSettlements.com writer Heidi Turner, was the use by Takata of ammonium nitrate to inflate the airbags. According to attorney Mo Aziz, of Abraham, Watkins, Nichols, Sorrels, Agosto & Aziz, ammonium nitrate is sensitive to changes in temperature. As temperatures move above, and below 90 degrees Fahrenheit, the propellant expands and contracts, affecting its stability.

Millions of vehicles have been subjected to an airbag recall. However a lack of parts is delaying the successful replacement of allegedly faulty airbag components, resulting in consumers continuing to drive vehicles that could be unsafe.

In an unrelated injury lawsuit, a 52-year-old plaintiff who was T-boned in a collision with another car was recently awarded $1.3 million in a settlement. Injuries included leg and ankle fractures, and a ruptured left eardrum alleged to have been caused by the deployment of the airbag. It is not known if the airbag was manufactured by Takata.

Posted by
Danielle Warner
on December 4, 2016
My 2001 mercury villager airbags did not infallate sure the impact of the accident we had on Saturday in a ditch my son hit the windshield