Acting on the advice of his employer, Brian asked his doctor to prescribe Adderall. No questions asked, no problem. “I was a bit fidgety so my boss thought the drug would help me concentrate,” says Brian. “But if I didn’t stop taking it, I think if I could have had an Adderall heart attack.” 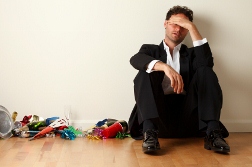 Less than a year ago Brian’s boss suggested that he take Adderall. “She thought I might have a bit of ADHD, says Brian. “I recently stopped taking it because I was getting chest pains and a rapid heart beat. I went back to my doctor and had an EKG but they didn’t see anything abnormal, there was no cause for concern. But I am sure that these Adderall side effects, the symptoms I was experiencing, felt like the beginning stages of a heart attack.”

Brian is 37 years old, 6’ 2” and 195 pounds. He works out and his job as a chef also keeps him fit. And there is no history of heart problems in his family. Neither did he have any previous symptoms of ADHD. As ridiculous as it seems, he wasn’t even diagnosed with ADHD. Brian didn’t talk about it with his doctor. Instead, his boss (who works in the food industry) diagnosed ADHD. “I think she takes Zoloft,” he says. “Everyone seems to be on something at this company so I had to jump on the pharmaceutical boat.

“I started to get panic attacks and paranoia, which I never had before,” Brian explains. “And I still get paranoid. For example, when I am driving my car I think someone is going to rear end me. When I walk to the post box I think someone is going to pull out his hunting gun and shoot me ??" very weird. Of course a few seconds after I have this paranoid episode I realize what is going on and attribute it to Adderall effects.

"There was one big incident that made me stop taking it, and I am embarrassed to this day. First, there is no warning on the Adderall bottle about not drinking alcohol ??" believe me, I checked after the fact.

"I went to a birthday party and apparently fell, hit my head and blacked out. My friends told me that I was rolling around in a pile of ice. The next day, they asked me how my head felt. ‘You took a big tumble last night,’ my friend said, and he asked me what I was on. I have never taken drugs in my life; I haven’t even smoked pot.

"My friend said that I should talk to my doctor about whatever I am taking. ‘You were out of control and basically whacked out of your mind,’ he said. I couldn’t remember a thing and it is so hard to believe this happened but the bruises and scrapes all over my body are proof that I was out of control. Apparently three people had to carry me to bed after I fell ??" I am not a small guy. I have known these people for more than 20 years and haven’t been able to face them yet because I am still so embarrassed.

"I went back to my prescribing doctor and told him about blacking out. He suggested I stop taking Adderall but if I change my mind he would refill it! Getting a prescription so easily is crazy. But you have to sign for it and show ID at the pharmacy, like a narcotic. I heard that college kids get this from the street.”

Health professionals warn the public not to take prescription drugs unless prescribed by a qualified physician. Goes without saying. But that doesn’t seem to be the case when it comes to Adderall, which is wildly popular with college students who buy it as a street drug. And some of them apparently get it via Facebook.

“Someone heard that I was taking Adderall and messaged me through Facebook, wanting to buy some from me,” says Brian. “I have never met the guy, who is in his early 20s, but we have mutual friends on Facebook. Needless to say, he didn’t get any from me.

More ADDERALL News
"I think Adderall helped me focus in the beginning and my employer said she could tell the difference but I didn’t notice and it certainly wasn’t enjoyable so I don’t understand the popularity and I don’t see the big fascination.”

Unfortunately many people don’t agree with Brian. Adderall heart attack, Adderall stroke and even Adderall death have been reported amongst both prescription users and prescription drug abuse on college campuses is rampant. And mixing Adderall with alcohol is a dangerous combination, as Brian can attest.

According to a report by Columbia University's National Center on Addiction and Substance Abuse, abusing prescription stimulants can result in addiction, respiratory problems, seizures and cardiovascular issues, such as an irregular heartbeat. And death.