"I am worried about the young people who are suffering from skin problems such as acne and are prescribed Accutane or its generic equivalents," says Katy. "So many parents naively think everything is OK if a doctor prescribes a medication, but doctors tend to disregard Accutane side effects like Inflammatory Bowel Disease [IBD} and Crohn's disease, which is very serious." 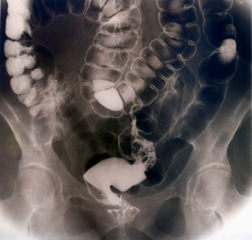 Katy (not her real name) says one of her daughters was prescribed Accutane to treat acne just before it was recalled in 2009 and her other daughter was also prescribed Accutane, but her pharmacist dispensed Claravis, a generic Accutane medication. (There are a number of generic versions of Accutane (isotretinoin) on the market, including Amnesteem and Sotret, and all of them are rated "AB" by the FDA, meaning that they should be equivalent to the brand name, i.e., Accutane.)

"My youngest daughter developed bowel problems last fall and when the pain and diarrhea didn't abate I took her to a gastroenterologist," says Katy. "Her blood tests show markers for Crohn's disease and that has really got me worried. She is in university and it is already affecting her daily activities and sleep patterns—Crohn's disease is going to change her life, to her detriment.

"It wasn't until now that I connected the dots. I was trying to figure out when she first developed intestinal problems and then I realized she finished the course of Claravis at the same time—Bingo! I immediately called my daughter but she had already put two and two together.

"As for my other daughter who took Accutane, she also suffers from bowel problems but she handles it differently—even though her symptoms are severe, she isn't so emotionally affected. Still, I am having her checked for Crohn's as soon as possible, but the Statute of Limitations has run out on her.

"Another reason it took me so long to link Accutane to IBD and Crohn's is because I mainly heard about the emphasis on Accutane birth defects. And the government's iPLEDGE program completely shut my mind to the fact that Accutane had side effects other than birth defects.

More ACCUTANE IBD News
"This program was put in place by the FDA to ensure that a woman of child-bearing age taking Accutane is using two forms of birth control—I guess the government is trying to protect unborn children. But it is ironic because my youngest daughter was not sexually active when she took Accutane. They both have monthly blood tests and sign forms saying that they will take two forms of birth control while taking Accutane or generic Claravis."

Katy understands that the Supreme Court decision regarding a generic drug has kept attorneys from proceeding on these kinds of claims, but a recent New Jersey Supreme Court case gives her hope regarding an Accutane lawsuit. The Court found for the plaintiff, determining that Roche, the Accutane manufacturer, had insufficient warnings on its patient literature and the plaintiff's claim was not subject to the Statute of Limitations.

Posted by
Chunghoe
on October 15, 2012
Hi, I'm a worried user Of accutane, I had been taking a dose of 20mg each day for 10 months, research has shown the increase in risks linked to dosage and duration of the medication, can I ask what's the dosage and duration of the drug your daughters took? I just ended my prescription for 2 months, I'm really concerned about it.
Posted by
Jason Binnes
on April 15, 2012
Accutane is increasingly infamous for causing severe and permanent bowel issues, typically IBS/Crohn's Disease. Few doctors bother to warn patients of the terrible risk, and label warnings are inadequate. Typically, as with the above cases, the terrible effects appear right at the end of the course of treatment. I am familiar with a friend's situation. He's young, was otherwise healthy except for complexion problems. Was not using any drugs at all, prescription or OTC. On finishing the course of Accutane, developed severe and presumably permanent IBS/Crohn's disease. His friends begged him to sue, and one of the top Acutane suit lawyers considered it a "very clean case" because the results were tied so closely to the Accutane and so well-documented. My friend, though, irrational and scared of lawyers, let the statute of limitations run out. He will now have to deal with the life-changing issues on his own, without the medical care and financial help that the lawsuit would have provided.