MRI Health Risks: "I would Hate to be Entombed"

"I had a second MRI about a year ago because my doctor thought I was having kidney failure," says James, "and I was injected with contrast dye containing gadolinium." James says he had the same procedure 5 years previously without any MRI health risks , but this last time he developed potential side effects for NSF/NFD. "It started with a rash and now my arms and legs look like alligator skin." 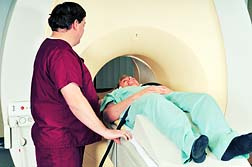 "A few months after the second MRI, I noticed little red circles with bumps on my legs and arms that left dark, hard spots. Now my skin looks like leather. I didn't pay much attention to it at first because I do a lot of gardening so I thought it was some reaction to a plant, but it got worse so I went to a dermatologist.

She informed me that it was just dry skin and prescribed an ointment and some lotion. I was using it but my condition got worse: My skin was splitting on my legs and all my joints started aching. I thought it was just age-related—I am 71. But I happened to be watching TV one night and saw an ad regarding MRI and these side effects—the same symptoms I was having.

Then I went online and looked up MRIs and read about more side effects that possibly explained why I was getting headaches and stiff joints in the morning. And my sight changed. Last year my eyes were fine but all of a sudden I need new glasses. I used to be able to see the veins in my arms—I can't see any now.

I went back to the dermatologist at the beginning of July and on my attorney's advice (at no charge), she took a biopsy from my leg. I am going to call him back as soon as I get the biopsy results—should be on July 20th."

Of course James is very concerned about MRI heath risks and the possibility of developing NSF/NFD from gadolinium in the contrast agent. " I read an article where a woman had this leathery skin all over her body—she actually got entombed in her own skin and died from NSF," says James. " So far it has covered my arms, hands, legs and feet and nothing works to stop it from spreading--it isn't just dry skin."

More MRI HEALTH RISKS News
According to Dermatology Times (June 2008) NSF was first described in 2001, and was originally referred to as nephrogenic fibrosing dermopathy. In January 2006, gadolinium was suggested as a specific trigger for NSF risk. And the Nephrology Nursing Journal (March 2008) reported "…there has been considerable concern in the nephrology community about the use of gadolinium-based contrast agents that are used as a contrast agent in magnetic resonance imaging (MRI). Patients with stages 3 and 4 CKD [chronic kidney disease] appear to be at increased risk."

However, in an email to LawyersandSettlements on July 15, 2009, Dr. Shawn E. Cowper, Clinical Pathology & Anatomic Pathology, Dermatology, Dermatopathology, New Haven, CT., said patients with stages 4 and 5 CKD are are at risk.

The Journal also said that, although gadolinium has been widely used for several years, there is recent evidence that this agent plays a central role in the development of acute renal failure (ARF), nephrogenic fibrosing dermopathy (NFD) and nephrogenic systemic fibrosis (NSF).