Were you looking for Zoloft or Zoloft and Birth Defect PPHN lawsuits?
Zoloft (known generically as sertraline) is a drug used to treat depression, obsessive-compulsive disorder, panic disorder, post-traumatic stress disorder (PTSD) and premenstrual dysphoric disorder. However, some research has suggested serious Zoloft side effects, including an increased risk of heart defects. The link between Zoloft and heart defects has some people concerned that pregnant women should not take the medication. SSRIs such as Zoloft have also been linked to an increased risk of Persistent Pulmonary Hypertension of the Newborn. At least one Zoloft lawsuit has been filed, alleging a baby was born with a fatal birth defect after being exposed to Zoloft prior to birth.

Send your Zoloft Heart Defect claim to a lawyer who will review your claim at NO COST or obligation.
GET LEGAL HELP NOW

Zoloft belongs to the group of antidepressants known as Serotonin Reuptake Inhibitors (SSRIs). 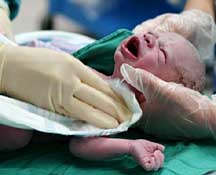 What is also known is that there is a link between other SSRIs and congenital malformations, including cardiac malformations. A study conducted at Aarhus University Hospital, Denmark, revealed that the risk of pregnant women giving birth to babies with birth defects, including heart defects, was increased among women who had prescriptions for SSRIs filled in the 30 days before conception through the end of the first trimester, compared with those who had no SSRI prescriptions filled during the same period.

A lawsuit has been filed against Pfizer, the maker of Zoloft, alleging an infant boy died of his birth defects shortly after being born because of exposure to Zoloft prior to birth. According to reports, Susan and James Hodge allege their son, Dillion, was born with anencephaly, a potentially fatal birth defect in which the infant is born without large portions of his or her brain. The infant died 18 hours after birth as a result of the defect. The Hodges allege that Pfizer knew the use of Zoloft during pregnancy could lead to birth defects and hid this information from patients.

The federal Food and Drug Administration categorizes this anti-depressant prescription drug in the pregnancy Category C. This label means that it is possible animal studies have indicated fetal harm from maternal use of the drug, but human trials have not yet determined that the risks of using Zoloft during pregnancy outweigh the drug's intended benefits.

Women who are taking SSRI antidepressants—including Zoloft—and are pregnant or thinking about becoming pregnant should speak with their doctor about the risks associated with taking the SSRI while pregnant. Although there are risks associated with taking Zoloft while pregnant, there may also be concerns about discontinuing medication. These risks should be balanced against the possible benefits of taking the medication.

If you took Zoloft while pregnant, and delivered a baby with heart defects, a lawyer may be able to help you. Please send your details to an attorney by clicking the link below for a free claim evaluation.
Please click here for a free evaluation of your Zoloft Heart Defect claim
Last updated on Jan-30-14

The family of a child born with birth defects they allege were caused by the antidepressant Zoloft, had their case defeated in court last week. The jury rejected the mother’s claims that Pfizer, the maker of Zoloft, hid the alleged health risks. The family of eight-year-old Mia Robinson sought at least $2.4 million in compensation for the child’s heart abnormalities.READ MORE
Pfizer Report Could Change Outcome of Zoloft Birth Defects Lawsuit

Pfizer may have been warned by a company drug safety official about a potential link between the antidepressant drug Zoloft and birth defects and recommended changes to the medication’s safety warning. Pfizer is currently facing over 1,000 Zoloft birth defect lawsuits, which allege the medication is responsible for newborn abnormalities including congenital heart defects.READ MORE
Zoloft Lawsuit Filed in Philadelphia

A Zoloft lawsuit alleging wrongful death has been filed against Pfizer and the maker of a generic version of Zoloft in Philadelphia. The lawsuit alleges an infant boy died of generic Zoloft birth defects and that the companies involved in the making of Zoloft and generic Zoloft failed to warn about the risks of Zoloft side effects.READ MORE

Posted by
Virginia
on March 21, 2012
My son Ben was born with heart problems and almost died at birth.
Posted by
South Carolina
on January 28, 2011
Lost my baby, emotional distress for a life time. Worry and wonder.
Posted by
Virginia
on January 9, 2011
Daughter was born with Atrial ventricular septal defect, and valve condition. She had surgery when she was 1 to correct this. Her valve has not fully corrected itself. Also she was supposed to have a twin, and her heart stoppped beating at about 8 weeks.
Posted by
Oklahoma
on December 28, 2010
Our daughter was born with Alobar Holoprosencephaly (HPE). She passed away after ten and a half days.
Posted by
Idaho
on June 2, 2010
Twin B diagnosed with cardiac defect (double outlet left ventrical), underwent multiple cardiac surgeries out of state due to premature birth (10 weeks early) and low birth weight (2 lbs 11 oz), and deceased at age four months of age.
Posted by
Alabama
on April 21, 2010
It was very traumatic to be told our 5 day old daughter had holes in her heart, she was very sick, was put in hospital at 2 months old, had a spinal tap done at 2 months and to this day she is still very tiny for her age. Weighs about 35lbs.
My first two pregnancies I took nothing but prenatals, not even aspirins and they were perfectly healthy and happy babies..
I was very concerned about taking zoloft while pregnant, but my doctor and all information I read said it was harmless to babies. I took this the entire duration of my pregnancy.

Posted by
Florida
on January 23, 2008
My daughter was born with Hypoplastic Right Heart Syndrome, with abnormal coronary circulation. She has undergone two open heart surgeries and will need at least one more by the time she is 3 years old. The grief, pain, and suffering that we have undergone far outweighs our insurrmountable pile of medical bills.
Posted by
New Jersey
on September 18, 2007
Life long complications, potential for serious life threatening incidents, monetary loss, emotional stress, missed work.
Posted by
Georgia
on August 15, 2007
My son was born with a VSD after my intake of Zoloft in the first trimester of pregnancy because the doctor said the benefits were better than the risk. I took myself out of it by the third monh because I read about it and didnt want to harm my child yet his heart was already affected.
Posted by
California
on August 10, 2007
My son was born with a heart abnormality/defect that can only be corrected with surgery and puts him at higher risk for sudden heart failure and death if he becomes too active. I took Zoloft throughtout my entire pregnancy after being told it would be ok by both my doctors and a mental health professional. During my pregnacy, my son at approx. 30 weeks in utero had a leak in his pulmonary valve. We were told to have him re-checked at around one month of age. That is when his heart defect was found. He has to be seen at least once a year by his cardiologist and have an EKG done, and every 4-5 years, he needs to have an MRI done to see how his heart is growing and if surgery will be mandatory. I am constantly worried every time he runs, plays too hard, and what his life will be like as a boy who already is extremely athletic (for a two year old) and loves to play outside and run around everywhere. I do not want to keep my son in a bubble, but I am also concerned that when he wants to play football in highschool, which he will, he will be at an increased risk for heart failure due to this rare defect as well as trying to determine how much activity is too much? All of his medical care to date has been covered by insurance, although I have had to pay a co-pay.
Posted by
Pennsylvania
on August 7, 2007
Taking zoloft during my pregnancy, my son was born with a heart defect called enlarged asending aorta with a bicuspid valve. My son will never be able to play sports such as football, wrestling, hockey, or weight lifting. He may require surgery in adolesence. I was told it was save to take zoloft during pregnancy.
Posted by
Montana
on July 22, 2007
When my son was six months old he underwent heart surgery at Seattle Childrens Hospital. My son now has permenant stents in his heart and a permanant pacemaker. He will require surgeries for the rest of his life.
Posted by
District of Columbia
on July 4, 2007
My daughter in utero had a murmer, and when she turned three we discovered she had holes in her heart. My daughter had surgery to correct this when she was five. My daughter is now seven.
Posted by
Alabama
on July 3, 2007
I stopped taking Zoloft 3 weeks before I had my son. He's 5 weeks old and we just found out that he has congenital heart disease. Two of his valves are fused together and it happened when he developed in the womb. He has a 40% blockage right now due to the fused valves and when it increases to 60%, he has to have open heart surgery.
Posted by
West Virginia
on June 27, 2007
My daughter will have to undergo surgery to repair an opening in her heart. She is now 19months old. At birth she had two heart defects, and the other one closed without surgery. She is scheduled for follow up July 19 at WV hospital that only deals with children and cardiac problems.