Symbyax linked to Primary Pulmonary Hypertension in the Newborn (PPHN)

An FDA Health Advisory, released July 19, 2006, warns that women who take SSRIs like Symbyax during late stages of pregnancy are six times more likely to deliver a baby that has Primary Pulmonary Hypertension in the Newborn (PPHN) than those who do not. 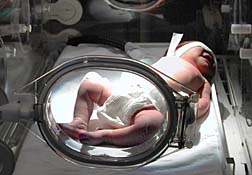 Primary Pulmonary Hypertension (PPH) is a life-threatening lung disorder that has no apparent cause. People with PPH suffer a constricting of the blood vessels in the lungs, leading to increasing pressure in the pulmonary artery which can result in death. Symptoms of PPH include shortness of breath, chest pain, fatigue, and dizziness. Many patients with PPH require a lung transplant.

PPHN is a serious condition in which newborn babies are not able to provide oxygen-rich blood to their bodies. This occurs because the pulmonary arteries do not open fully and blood is unable to become oxygenated. When organs do not receive the oxygen they need, they are put under stress which puts the infant's life at risk. Newborns with PPHN exhibit symptoms such as rapid breathing or difficulty breathing, a rapid heart rate, or bluish skin.

Even with treatment, 10% to 20% of newborns with PPHN do not survive.

The FDA Health Advisory was issued after a study, published in the New England Journal of Medicine, found that for pregnant women who took SSRIs such as Symbyax during the second half of pregnancy the risk of having a baby with PPHN increased dramatically. In the general population, PPHN occurs in approximately one or two infants per 1,000 births. However, in infants exposed to antidepressants during the late stages of pregnancy that number increases to six to twelve infants per 1,000 births.

Symbyax is placed in FDA Pregnancy Category C, meaning that results from animal studies show that there is a possibility of harm to the fetus, but human studies do not show that the risk of birth defects is greater than the risks involved in stopping medication. The FDA is seeking more information on the risks associated with taking SSRIs while pregnant.

Symbyax can be transferred to an infant through breast milk. Additionally, babies whose mothers took Luvox while pregnant suffer withdrawal symptoms such as agitation, poor feeding, and insomnia.

If you are pregnant or plan on becoming pregnant, consult with your doctor immediately to determine whether or not you should continue taking Symbyax.

If your child was born with the birth defect PPHN or heart defects, and you took Symbyax during pregnancy, an attorney may be able to help. Please click the link below and a lawyer will review your complaint at no cost to you.
Please click here for a free evaluation of your claim
Last updated on Feb-27-14