Send your Lexapro Birth Defect claim to a lawyer who will review your claim at NO COST or obligation.
GET LEGAL HELP NOW

Lexapro (also known as escitalopram) is an antidepressant used to treat anxiety and major depressive disorder. It is part of a group of drugs called Selective Serotonin Reuptake Inhibitors (SSRIs). 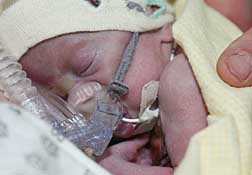 The FDA released a Health Advisory on July 19, 2006, alerting women to the risks associated with taking SSRIs while pregnant. The advisory was based on a study published in the New England Journal of Medicine that found that mothers who took SSRIs such as Lexapro during the second half of their pregnancy were six times more likely to have a baby with Persistent Pulmonary Hypertension in the Newborn (PPHN) than those who did not take SSRIs late in pregnancy.

According to Lexapro Frequently Asked Questions (at lexapro.com), "There have been no studies done to show that Lexapro is safe to use in pregnant women. Therefore, Lexapro should be used during pregnancy only if the potential benefit justifies the potential risk to the unborn child."

Studies suggest that use of SSRI medications, such as Lexapro, during pregnancy can increase the risk of cardiac birth defects. These include:

Lexapro and Hypoplastic Left Heart Syndrome: Occurs when the left side of the infant's heart, which includes the mitral valve, left ventricle and aorta, does not develop properly. This can result in sudden death. Patients may require surgeries and/or a heart transplant to survive. Furthermore, patients who survive may require further surgery later in life.

Lexapro and Pulmonary Stenosis: Narrowing of the pulmonary valve that results in less blood flow to the lungs.

Lexapro and Septal Defect: Occurs when a hole develops in the wall of the infant's heart. This can result in improper blood circulation, which causes the heart to work harder than it should. Patients may require open-heart surgery.

Lexapro and Tetralogy of Fallot: This birth defect, which actually involves four components, (narrowing of the pulmonary valve, large ventricular septal defect, dilated aorta connected to both the left and right ventricles and thickening of the right ventricle) can result in blood not receiving enough oxygen from the lungs before traveling throughout the body. Surgery can be required.


Lexapro and Craniosynostosis: Occurs when one or more of the sutures in an infant's skull harden prematurely. This can cause a misshapen skull, intracranial pressure, and a lack of growth in the child's head as she ages. A 2007 study, published in the New England Journal of Medicine (06/28/07), found an association between the use of SSRis during pregnancy and a risk of craniosynostosis.

Lexapro and Cleft Palate: Occurs when the separate parts of the skull that form the roof of the mouth do not join completely, causing a cleft. An incomplete cleft is a hole on the roof of the mouth, which a complete cleft palate involves the soft and hard palate. A cleft palate can cause problems with feeding, speech and breathing and can cause ear infections and hearing loss.

Lexapro and Cleft Lip: A facial defect affecting the infant's upper lip. A partial cleft is a small indent in the lip, which a complete cleft is a large groove that runs from the upper lip to the nose. The cleft can cause delays in speech and language.

Lexapro and Club Foot: Occurs when the bones, joints, muscles and blood vessels in an infant's leg and foot are abnormal. It can affect one or both feet and generally presents with the foot turned inward and downward. Without treatment, club foot can cause pain and problems with mobility.

Lexapro and PPHN: PPHN, or Persistent Pulmonary Hypertension of the Newborn, occurs when the blood flow to the lungs is constricted, limiting oxygen in the blood stream. PPHN can be fatal. Infants who survive often require medical intervention, sometimes including heart transplants.

If you took Lexapro while pregnant, and your baby was born with PPHN or later developed PPH, a lawyer may be able to help you. Please click the link below and your claim will be sent to an attorney who will evaluate your case for free.
Please click here for a free evaluation of your Lexapro Birth Defect claim
Last updated on May-7-15

The maker of the popular antidepressant Lexapro lost millions in sales when the drug’s patent expired in early March of 2012. Lexapro brought in $13.8 billion for Forest Laboratories in just one decade - that’s a whole lot of depressed people, including pregnant women, some of whom gave birth to babies with birth defects.READ MORE
In Lexapro Birth Defects Litigation, Does the Doctor Share the Blame?

As we prepare to head into the ninth year since the US Food and Drug Administration (FDA) first released its safety advisory with regard to Selective Serotonin Reuptake Inhibitors (SSRIs) and their use by pregnant women, pundits will be watching the legal horizon for SSRI birth defect lawsuits scheduled to get underway in 2015. As of October there were about 200 lawsuits alleging SSRI and Lexapro birth defects in multidistrict litigation in Cole County Circuit Court Missouri.READ MORE
Are Opinions Changing Over the Potential for Lexapro Birth Defects?

It will soon be a year since Michigan resident Chandra Shuck launched her Lexapro birth defects lawsuit against Forest Laboratories Inc. (Forest) and H. Lundbeck A/S (Lundbeck). It’s been a lot longer since Shuck held her infant daughter in her arms. The little girl died in the third week of April 2005 after enduring four open heart surgeries in an attempt to correct heart defects. The infant survived just two weeks.READ MORE

Posted by
Marissa Hodgson
on September 18, 2018
My son was born with pphn. He was not born eaely. He fought for his life and was on ventilator nitric oxide etc. I took lexapr o while pregnant because I was told it was more dangerous for my baby if I was depressed. My son was air flighted to denver. He did survive!! He still has breathing issues. How do you get a law suit?
Posted by
Jim
on May 15, 2016
My daughter had CDH too.
Posted by
Missouri
on July 26, 2011
Daughter was born with craniosynostosis and tetralogy of fallot. I took Lexapro while I was pregnant with her because I was told it would be more harmful to stop taking it and would not harm her.
Posted by
Illinois
on June 20, 2007
My baby was born with a birth defect called a diaphagmatic hernia, his diaphram never closed properly and his stomach, liver, and intestines were inside of his chest preventing his lungs from growing. My baby's vein in his lungs never grew, therefore born without any. My baby lived for 3 1/2 hours, he was born May 2nd of 2007 at 11:26pm, and past away that following morning on May 3rd of 2007 at 3:00am. Please contact me if this is caused from Lexapro, me and my husband were taking it.