Were you looking for Operating Room Equipment Injury Lawsuits lawsuits?

Send your Laparoscopic Power Morcellation claim to a lawyer who will review your claim at NO COST or obligation.
GET LEGAL HELP NOW 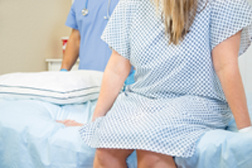 Laparoscopic uterine surgery via power morcellator has been marketed as a non-invasive hysterectomy or myomectomy. The surgery is used in women who are undergoing a hysterectomy or myomectomy for uterine fibroids. Power morcellation is a procedure that uses a medical device to break the uterine tissue into smaller pieces so it can be removed through a small incision in the patient's abdomen. Uterine fibroids are typically non-cancerous growths in the uterus that do not generally cause health problems but can cause pelvic pressure, pain and prolonged menstrual bleeding.

Power Morcellation has been used as a replacement for traditional surgery because the smaller incision puts the patient at less risk of blood loss and infection and generally has a shorter recovery time.

In 2014 the FDA issued a safety communication on power morcellators and recommended that manufacturers add a boxed warning to device labels. The agency also warned that the "vast majority" of women undergoing removal of the uterus (hysterectomy) or fibroids (myomectomy) should not have surgery that involves the use of a power morcellator.

However, a Feb. 2017 report issued by the US Government Accountability Office (GAO) revealed that the FDA already knew of the potential risk for laparoscopic power morcellators to spread cancer 22 years before issuing its 2014 warning.

According the GAO report, the FDA "was aware of the potential for power morcellators to spread tissue (cancerous and noncancerous) when the agency cleared the first device in 1991" but believed there was a low risk of unsuspected cancers that could spread.


In July 2014, Johnson & Johnson sent a letter to medical care providers as part of that company's worldwide voluntary market withdrawal of all Ethicon Morcellation Devices. In its letter, Johnson & Johnson noted, "the risk-benefit assessment associated with the use of these devices in hysterectomy and myomectomy procedures for removing fibroids remains uncertain."

Lawsuits have now been filed against the makers of some power morcellation devices, alleging women were harmed by the use of the devices. The lawsuits allege the use of a morcellator device resulted in an aggressive cancer—leiomyosarcoma—spreading throughout the patient's body. The lawsuit alleges that Ethicon—a division of Johnson & Johnson—knew or should have known about the risk of a morcellation device spreading cancer in the patient's body, but failed to warn about that risk.

If you or a loved one has suffered similar damages or injuries, please click the link below and your complaint will be sent to a lawyer who may evaluate your claim at no cost or obligation.
Please click here for a free evaluation of your Laparoscopic Power Morcellation claim
Last updated on Feb-27-17

Washington, DC: The US Food and Drug Administration (FDA) has provided the medical community with guidance on the use of ultrasonic surgical aspirators. Specifically, the agency is advising companies that make the devices to label them as contraindicated for the removal of uterine fibroids. The non-binding guidance from the agency serves to strengthen its recent warnings about the use of power morcellators to remove uterine fibroids.READ MORE
Power Morcellation Cancer Warning One Year Too Late for Doctor


This action by the hospital and the gynecology profession begs the question: are they receiving perks from power morcellation manufacturers? It wouldn’t be the first time that doctors were bribed by drug companies to increase sales, and even sit on their advisory committees…
READ MORE

Upper Saucon Township, PA: Olympus Corp. of the Americas has settled four lawsuits for injuries and one death allegedly related to the company's power morcellator surgical device, according to The Morning Call.READ MORE