In a blog posted to the official website of the US Food and Drug Administration (FDA) in October of last year, the regulator’s Director of the Center for Devices and Radiological Health noted that a survey conducted the year prior involving hospitals demonstrated that numerous reports of Ovarian cancer cells spread by power morcellators were not shared with the FDA’s adverse reporting system. An accompanying inspection found that in many cases hospitals had no system in place for staff to submit reports to the FDA or device makers; and that staff did not always know, or were not properly trained with regard to the reporting of injuries and deaths associated with medical devices. 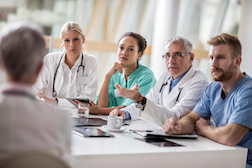 “Based on the number of user facilities in the United States and the number of reports we receive, we believe that these hospitals are not unique in that there is limited to no reporting to FDA or to the manufacturers at some hospitals,” wrote Jeffrey Shuren, MD, JD, in a blog posted to FDA Voice October 24 of last year.

“...We feel certain there is a better way to work with hospitals to get the real-world information we need, and we should work with the hospital community to find that right path, especially in light of developments in the creation and evaluation of electronic health information.”

The US Government Accountability Office (GAO), weighed into the debate earlier this month:

The GAO agreed with Dr. Shuren’s summary of the situation. “The [FDA official] noted that while these events appeared to be the kind that would have fallen under the agency’s medical device reporting requirements, the agency did not see corresponding adverse event reports submitted to FDA’s adverse event report database,” the GAO said.

Pundits and industry watchers note that while the GAO makes no specific recommendations on how to rectify the problem, the GAO report is nonetheless a damning commentary on the state of affairs involving power morcellation, an oft-used device for Hysterectomy, fibroids, and Laparoscopic Uterine Surgery for women.

Laparoscopic procedures that utilize smaller incisions have been favored in recent years for faster healing times and reducing the drain on hospital resources, including available beds. A power morcellator is inserted through a small incision and sections the uterus for hysterectomy, or treatment for fibroids.

And power morcellators are not new: they’ve been around since the 1990’s. However, it wasn’t until 2013 that the first reports began to come in that undiagnosed uterine cancer cells were being spread throughout the abdomen through the use of Laparoscopic Power Morcellation.

Since 2013, the FDA has received some 285 reports of undiagnosed cancers spread by way of what some are describing as dangerous medical procedures.

A few years ago Ethicon, a division of Johnson & Johnson, withdrew its power morcellator from the market altogether.

More LAPAROSCOPIC POWER MORCELLATION News
The FDA, however, has allowed power morcellators to remain in use, although the regulator issued an edict in 2014 warning that power morcellators had the capability of spreading cancers and recommended the devices not be used for Hysterectomy or Laparoscopic Uterine Surgery for women of any kind that involved cancer, or treatments for fibroids.

Many a dangerous medical procedures lawsuit asserts use of the device spread undetected cancers that might otherwise have remained contained. Meanwhile, the situation appears poised to only get worse. “Based on the number of user facilities in the United States and the number of reports FDA receives, this agency believes that these hospitals are not unique, in that there is limited to no reporting to FDA or to the manufacturers at some hospitals,” the GAO wrote in the report.

Akin to undiagnosed uterine cancers, the concern is spreading…