Send your Guardian Life Insurance claim to a lawyer who will review your claim at NO COST or obligation.
GET LEGAL HELP NOW 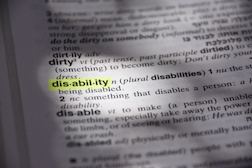 Guardian is a large company with more than 5,000 employees serving about five million customers. Guardian Life mainly issues long term disability policies to licensed professionals and executives such as doctors and dentists, lawyers, accountants, and corporate and government employees. A number of its policyholders have filed disability lawsuits—personal injury cases—against the insurance company claiming bad faith insurance and alleging the company denied their Guardian long term disability insurance. Although the company rates better than other insurers (it isn’t included in the “10 worst insurance companies ”) and it is known to be well-managed by experienced disability claim managers and examiners, numerous insurance lawsuits claiming wrongfully denied benefits are filed every year.

If you have had your claim denied, or if your claim was granted and then later terminated, you may be eligible for additional benefits.

Guardian has a reputation for conducting business in good faith, but lawsuits and settlements reveal numerous denial tactics. Here are some common bad faith tactics:

As well, some claims are denied or underpaid due to the policy or claim itself, such as:

Guardian Life sells most long-term disability (LTD) policies as group plans to employers. If a claimant is eligible for LTD coverage as an Employer-provided benefit, any disputes over coverage by the policy are usually governed by the Employee Retirement Income Security Act (ERISA).

Guardian Life Insurance Company of America has been in the insurance business since 1860, and this Fortune 300 company is one of the largest mutual life insurance companies in the US. As of December 31, 2009, Guardian and its subsidiaries had $30.9 billion in assets. The company earned a net income of $271 million in 2013. There is speculation that some of these profits were made by denying LTD to its policy holders.

Lawsuits filed against Guardian allege the company committed fraud and breach of contract. Many lawsuits stem from denial of legitimate Guardian long term disability insurance claims—where the insurance company allegedly unfairly and improperly fails to compensate the insured for a loss covered by their policy, or unreasonably delays making payments due under the policy.

In November 2016, Barry Weber filed a complaint against The Guardian Life Insurance Co. of America citing ERISA. According to the lawsuit, plaintiff alleges that he was denied LTD benefits by Guardian. The plaintiff believes that the defendant's decision to deny him of payment of benefits were highly influenced by its conflicting duties to him and its shareholders, despite his eligibility to receive benefits and being subjected to an unreasonable claims process by the defendant.

Randal M. was first diagnosed with an injury or illness to his spine in August 2009. He applied for and received short-term disability benefits from Guardian. Plaintiff then applied for LTD. In April 2010, Guardian denied Plaintiff LTD benefits, claiming plaintiff had a pre-existing condition that makes him ineligible for long-term disability benefits as defined by the Plan.

Plaintiff became totally disabled at age 51. Guardian’s LTD benefits policy covers the Plaintiff up to the age of 65. Because Plaintiff was never diagnosed or treated for a spinal injury or before August 2009, he did not have a pre-existing injury or illness. (In Randal M. Vs The Guardian Life Insurance Company Of America.)