Send your Aetna Denied LTD claim to a lawyer who will review your claim at NO COST or obligation.
GET LEGAL HELP NOW

Long-term disability insurance is meant to provide peace of mind to policyholders that, should they somehow become sick or injured and unable to work, they will still receive a portion of their pre-disability earnings to help them make ends meet. Long-term disability plans typically begin providing benefits after around six months of illness or injury, and provide the insured with between 60 and 80 percent of their pre-disability earnings. 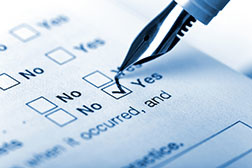 Insurance companies are required to pay out all legitimate claims in good faith. This means the claim must be adequately investigated, and paid in a timely manner. If companies unreasonably deny or delay payment of claims to protect profits or meet quotas, they may be acting in bad faith. If companies fail to properly investigate a claim, not provide benefits as laid out in the policy contract, or not adequately inform policyholders of the terms of their policy (including changing the terms without adequate notification), policyholders may be able to file a lawsuit against the insurance company to have the decision reversed.

Insurance companies may also use misleading language in their claims forms in an attempt to get policyholders to state they are less injured than they are, or not include legitimate health conditions on their list of covered disabilities.

A lawsuit was filed against Aetna Life Insurance Company by Joseph McDonough (case number 14-1293, US Court of Appeals for the First Circuit). In his lawsuit, McDonough alleged his long-term disability insurance claim was unfairly denied by the insurer, based on a short sentence in a doctor's report that was ultimately taken out of context. The First Circuit criticized Aetna for not comparing the plaintiff's injuries with the demands of his job. Even though he was physically capable of sitting upright for eight hours, for example, did not mean McDonough was capable of the complex decision-making required in his job. In its ruling the First Circuit remanded the case to the District Court for further evaluation.

If you or a loved one has suffered similar damages or injuries, please click the link below and your complaint will be sent to an Insurance attorney who may evaluate your claim at no cost or obligation.
Please click here for a free evaluation of your Aetna Denied LTD claim
Last updated on Oct-14-20

In November 2018, a jury awarded nearly $25.6 million to the family of a Oranna Cunningham, a woman who was diagnosed with advanced nasopharyngeal cancer. Her insurer, Aetna, refused to cover the cost of the proton beam therapy recommended by her physician, claiming that it was “experimental or investigational.” After her death, her husband brought a bad faith insurance lawsuit.


Through his attorney, he alleged that “Aetna’s denial of her claim involved overworked, under-qualified doctors working in the interest of their employer’s bottom line who are compensated in part based on the profitability of the company.”


The jury apparently agreed; nearly $10 million of the award is in the form of punitive damages, intended to punish the insurer for bad faith.

Evidence was presented at trial that none of Aetna’s in-house medical reviewers was a specialist in proton beam cancer therapy. One was an internal medicine/family practice doctor who had not treated a patient in 25 years. Another was general surgeon, and the third was a hematologist/oncologist who had no experience with radiation therapy. None had spent more than 30-45 minutes reviewing the claim for treatment, and at least one had complained in an official personnel file of having to review 80 or more claims per day. None had read the insurance contract before denying the claim.


One of the reviewers allegedly spoke to a doctor treating Ms. Cunningham and acknowledged that the treating doctor’s recommendation for proton therapy was appropriate. However, he said that he had to deny the claim anyway.

Proton beam therapy is an FDA-recognized treatment, often approved for pediatric and Medicare patients. It allows doctors to precisely focus cancer-fighting proton energy on cancerous cells, thereby minimizing stray damage to other healthy tissues. It’s targeted; it preserves organ health; and it may reduce other harmful side effects.


The location of Ms. Cunningham’s tumor made the risk of blindness, memory loss and other grievous consequences particularly acute. However, at 54, she was neither young nor old. She fell in the age gap. No one has yet explained why that put her outside the range of coverage.


According to the Alliance for Proton Therapy Access, nearly two-thirds of cancer patients between the ages of 18 and 64 whose physicians recommend proton therapy as the best course of treatment for their disease are initially denied by their insurer. Patients and their physicians are sometimes successful in reversing the initial denial, but the delay averages nearly three weeks in the end. According to their report, proton therapy is denied more than four times out of ten, and it takes an average of more than five weeks for patients to receive that final denial.


The problem of coverage denials for treatments deemed “experimental or investigational” is not limited to proton beam cancer treatments, as patients who have sought coverage for other forms of modern medical treatment, including technologically advanced pacemakers or microprocessor-augmented prosthetic knees can testify. Many physicians reportedly strongly that “experimental or investigational” denials are often a sham.


The denials may certainly add time and cost to a patient’s treatment, and the delay can affect the quality of outcome. Oranna Cunningham and her husband mortgaged their home to pay for proton beam treatment. She died shortly after receiving treatment anyway. There are apparently no allegations that a delay in treatment damaged her prognosis, but it might in other cases, especially in those where patients had no other financial recourse.

The jury’s award is fairly certain to be appealed for a variety of reasons. The most obvious of these is the size of the punitive damages portion.


Oklahoma’s tort reform law limits non-economic damages, including punitive damages, to $350,000. The cap can be waived where there is clear and convincing evidence of reckless disregard for the rights of others, gross negligence, fraud or malice. The attorneys for the Cunninghams will certainly argue this, but the result is uncertain.


In addition, they may argue that the lawsuit was brought as a contract dispute, not a tort case, since it involved the interpretation of an insurance policy. Counsel for Aetna will certainly counter with a policy argument about runaway jury verdicts, especially in situations where the plaintiffs are as likeable and sympathetic as the Cunninghams appear to have been.


Finally, of course, there is the question of whether Aetna’s denial of coverage, in fact, caused Ms. Cunningham’s death. She received proton therapy, which appeared at the time of her death to be shrinking the dangerous tumor at the base of her brain stem. She died of an infection. Whether the infection can be traced to the denial of coverage will be a matter of potentially difficult proof.
READ MORE


Aetna Denies Disability – Is there a Doctor in the House?

California's insurance commissioner in February 2018 launched an investigation into Aetna after discovering a former medical director for the insurer (independent medical examiner) admitted under oath that he never looked at policy holder’s records to decide whether to approve or deny their long term disability benefits. Now a California woman has filed a complaint against the huge insurance provider claiming a similar issue.READ MORE
Aetna Long Term Disability Lawsuit Demonstrative of Dissatisfaction with Insurers

Bangor, ME: Given a widespread dissatisfaction that many consumers have with delays in claims processing on the part of their insurance companies – and dissatisfaction with the insurance industry overall – it comes as little surprise that an insurer such as Aetna is tagged with a rating of a hair over one star out of five, according to the Consumer Affairs website. That rating is based, when the site was checked in early September, on 95 ratings from 125 reviews. Meanwhile, an Aetna long term disability lawsuit launched several years ago is demonstrative of the kind of angst a policy holder goes through when it comes time to make a legitimate claim from an insurer.READ MORE
READ MORE LTD Insurance Fraud Settlements and Legal News
READ MORE Consumer Fraud Settlements and Legal News
READ MORE Insurance Settlements and Legal News

Posted by
Mike Mengis
on April 22, 2016
I have been denied my pension from Western Conference of Teamsters Pension Trust after providing all proper information including my award letter for 100% disability ! there is no valid reason for denial ! there is not one possible reason for a denial other than I am representing myself ! I look forward to providing you with document needed to correct the denial!