Given a widespread dissatisfaction that many consumers have with delays in claims processing on the part of their insurance companies – and dissatisfaction with the insurance industry overall – it comes as little surprise that an insurer such as Aetna is tagged with a rating of a hair over one star out of five, according to the Consumer Affairs website. That rating is based, when the site was checked in early September, on 95 ratings from 125 reviews. Meanwhile, an Aetna long term disability lawsuit launched several years ago is demonstrative of the kind of angst a policy holder goes through when it comes time to make a legitimate claim from an insurer. 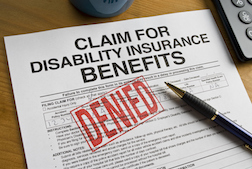 The plaintiff in Bonnie Ramsdell v. Aetna Life Insurance Company asserted in her Aetna LTD lawsuit that she had been subjected to sexual harassment while on the job at Huhtamaki Americas, Inc. Ramsdell, who began to suffer symptoms of anxiety, depression and post-traumatic stress disorder as a result of the alleged harassment, was subsequently ordered off work for a period of time by her primary care physician.

Ramsdell was off work for a little more than three months, from February 18, 2010 through May 24 of that year. However, ongoing treatment proved unsuccessful. Later that fall, on November 3 the plaintiff’s primary care physician concluded the following:

“It is my clinical impression that Ms. Ramsdell’s past and existing symptoms would prevent her from performing factory work. Additionally, I do think that Ms. Ramsdell is unable to work in a similar factory setting anywhere given the extent of her illness and symptoms that have continued.”

The aforementioned statement appears to disagree with that of Aetna’s in-house physician, who reviewed Ramsdell’s case and concluded that in spite of the opinion of the claimant’s treating physicians that Ramsdell was unable to perform her job duties even in a different work environment, it was the opinion of the in-house physician that, based on information provided, the claimant’s emotional distress was circumscribed to her particular work environment and co-workers from performing her specific job duties. While it was understandable the claimant would prefer not to return to her reported unpleasant work environment, the information did not substantiate the presence of a functional impairment.

In other words, the two camps were at odds. The plaintiff’s doctors were of the view, based on medical evidence, that their patient was disabled. The in-house physician with Aetna, took the opposite view.

That was a problem for Ramsdell’s application for benefits. The plaintiff was covered for both short-term and long-term disability through a policy with her employer. Soon after she stopped work at the behest of her primary care physician, Ramsdell applied for short-term disability benefits, but was denied on April 2, 2010. The plaintiff appealed. However, Aetna stood by its original decision after hearing Ramsdell’s appeal, with the denial founded upon a statement provided by Aetna’s in-house physician.

Aetna, it is alleged by the plaintiff’s Aetna denied long term disability lawsuit, also denied Ramsdell’s application for LTD benefits and quickly concluded the plaintiff had exhausted all avenues of relief available to her.

Ramsdell subsequently launched an Aetna long term disability lawsuit, asserting amongst other allegations that Aetna had usurped provisions entrenched in the Employee Retirement Income Security Act, ERISA, as amended in 1974.

While the Aetna LTD lawsuit was filed in 2010, more recent complaints about Aetna posted to consumer chat rooms as recently as June of this year suggest Aetna – like many other providers within the insurance industry – continues to push back against legitimate claims by consumers who have faithfully paid their premiums, and undertaken due diligence in providing timely and adequate medical reports to support a claim.

The Aetna long term disability lawsuit is Ramsdell v. Aetna Life Insurance Company, Case No. 1:11-cv-00398-GZS, in US District Court for the District of Maine.

If you or a loved one have suffered losses in this case, please click the link below and your complaint will be sent to an insurance lawyer who may evaluate your Aetna Denied LTD claim at no cost or obligation.
Request Legal Help Now

Posted by
Terry
on September 9, 2017
Aetna approved my STD claim, but denied my LTD claim a few weeks ago. It relates to a pre-existing condition for which I had NOT sought treatment for during the time frame questioned. They say that, because I take prescriptions - which have not changed in almost 15 years and are automatically refilled and mailed to my home - that I received treatment. Someone explain to me how that is 'seeking treatment for a pre-existing condition!'