In the wake of the recent economic and financial meltdown come the first lawsuits alleging that companies and their brokers were negligent and caused some of the massive stock market losses. And, while some of the complaints are against stockbrokers for giving their clients bad stock market financial advice, there are now lawsuits being filed against major companies for not acting in the best interests of their shareholders. 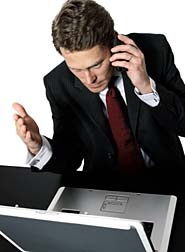 Reuters reports a lawsuit has been filed by a shareholder against American International Group (AIG), alleging the company violated the shareholder's rights when it accepted the government's bailout in return for a majority stake in the company. The bailout amounted to $85 billion and gave the government a 79.9 percent stake in AIG. However, AIG's board reportedly agreed to the bailout without allowing shareholders to vote on it. According to the lawsuit, which seeks class action status, "Absent judicial intervention, the transaction approved by AIG's Board will be crammed down on the company's stockholders in violation of basic principles of corporate law."

Meanwhile, Freddie Mac faces a lawsuit of its own, alleging it concealed and misrepresented its poor financial practices when communicating with investors. The lawsuit also alleges that Freddie Mac, a mortgage company backed by the federal government, did not have enough assets to protect itself from problems in the housing market. The class action lawsuit follows the loss of $18 million in North Carolina state pension fund investments and represents government workers and retirees. Freddie Mac has now been taken over by the federal government.

According to court documents, cited in the News Observer, the state's retirement plans invested $20.1 million in Freddie Mac securities from November 21, 2007 through August 5, 2008. To date, less than $2 million remains. That's a lot of money to take away from pensioners and retirees who count on that money to see them through retirement.

There are many perils for investors to watch for when they invest in the stock market. Some of those perils involve normal fluctuations and losses associated with investing. Those are understandable and most investors, when they encounter losses associated with normal risk, realize that they could not have foreseen the losses or at least accept that they chose risky investments.

However, when their money has been invested in something risky despite their requests that the money be invested conservatively, investors have every right to be angry. It is not up to the financial advisor to ignore investors' wishes and invest the money as he or she sees fit. Imagine the shock of thinking that your money has been invested safely, watching other people worry about their investments and saying, 'I'm glad I'm not in their shoes,' only to learn that you are, indeed, in their shoes. You just didn't know you were.

More STOCK MARKET LOSSES News
That is what some investors now face, as they learn that either their money was not invested in the way they instructed or the companies they invested with misled them about the stability of their investments. In both cases, the investor has moved out of the realm of acceptable risk and into the realm of poor or unethical dealings.

There is a lot to know about investing—far more than the average investor could possibly hope to learn or understand. That's why he relies on his advisor and on the word of the companies he invests in. He counts on them to be honest and upfront about the investments and he counts on the advisor to provide accurate advice and then follow the investor's instructions.

If those instructions are not followed, the investor has every right to fight back—through a FINRA arbitration claim or through a lawsuit.